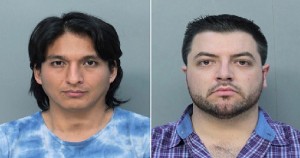 Arrested in Miami Beach, Reid and Espinoza were exposed through an undercover operation back in February. The police learned about them by wandering around bitcoin exchange website known as LocalBitcoins. They pretended to be credit card thieves trying to launder their illegal profits.

The undercover law enforcements trolled online directory of bitcoin merchants to find the two men. They later setup separate meeting with each of the men at restaurants and coffee shops. Arrested on the same day, the two men were arrested at the same Miami Beach hotel but at different times.

Reid and Espinoza have pleaded not guilty to the charges against them. Their lawyers are hopeful about getting the charges removed from them because, according to their lawyers, unregulated bitcoin are not considered to be money as was the case at the time of the arrest.

The Miami-Dade County prosecutors, on the other hand, insist that the money laundering charges are befitting the alleged crime committed by the two men. The undercover law enforcement belonging to the U.S. Secret Service and Miami Beach police explicitly told both men that they wanted to buy bitcoins with cash apparently obtained by hacking Target Corp. customer information. In the secretly videotaped meetings, the undercover officers stated they wished to gain more stolen credit cards.

“These cybercriminals are way ahead of the rest of us in terms of trying to figure out ways they can launder dirty money.”

The Internal Revenue Service aka the IRS issued regulatory policies in March deducing that bitcoins can only be taxed as property and are not considered a legal tender.

“My client has never dealt in the area of stolen credit cards,” stated Espinoza’s attorney, Rene Palomino Jr. “My client was simply selling a piece of personal property, which is what a bitcoin is. It has not been recognized as currency yet in the United States.”

Reid and Espinoza face up to twenty five years in prison each if they are convicted of money laundering and participating in unlicensed money services business. While Espinoza has not been able to make bail, Reid is free on $100,000 bail.

Reid’s attorney Ron Lowy stated that the prosecution was simply a setup. He expressed cynicism over how the case has been handled. Lowy said,

“The government is frightened of bitcoin. Apparently, they see it as an emerging, new type of economic medium of exchange, and they’re worried that they’re not regulating it close enough. These facts do not constitute a crime.”

Bitcoin has been rising in popularity and governments around the world have been trying to categorize and regulate this digital currency. This has been an ongoing process and no due date is in sight of when this issue will settle with the law enforcers.