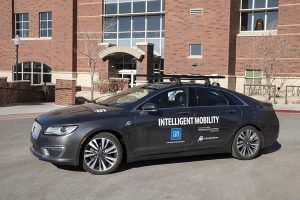 The smart city project is being conducted via the Nevada Center for Applied Research (NCAR) of the University of Nevada, Reno. The project will better communication and safety between autonomous linked vehicles and nearby infrastructure with LIDAR and dedicated short-range communications (DSRC) devices mounted at intersections.

NCAR director Carlos Cardillo stated in a press release CoinReport received, “The growth in the number of connected vehicles on roads will lead to an increase in the number of IoT devices, which can potentially create vulnerabilities.

“Working with Filament as part of Intelligent Mobility will help us to create and validate secured data generated from the many connected LIDAR devices including those in autonomous vehicles that will soon be a common feature in our cities and towns. We believe this can result in a new set of data integrity standards that others can follow when rolling out their own initiatives.”

The University of Nevada, Reno will start virtual trial of Filament’s Blocklet® technology. The institute plans to soon incorporate the technology into both an autonomous vehicle and the sensor infrastructure put along defined paths to provide a reliable events record, allowing for attested data exchange through blockchain transactions.

Filament CEO Allison Clift-Jennings commented, “We are excited to collaborate with the University’s Intelligent Mobility initiative on advancing this cutting-edge vehicle-to-infrastructure communication innovation. This is an important project for all cities preparing for autonomous vehicles as it will demonstrate how secure distributed ledger technology combined with connected, driverless cars and their surroundings can become a trusted reality.

“For the project, the University’s test vehicles will accept only Blocklet-attested data transmissions, protecting them from potential bad actors or man-in-the-middle attacks. And with the data recorded on a blockchain, the shared root of trust is established for transparent exchange and transactions.”

With the commitment and support of its startups, industries and research universities, Nevada has established itself as a leading place for pioneering vehicle and transportation technologies. The University of Nevada, Reno’s Intelligent Mobility, which is supported by the Nevada Governor’s Office of Economic Development, is testing corresponding mobility ideas and collecting data in real-world, “Living Lab” environments.

It is anticipated that a vehicle-to-infrastructure communication project showing the security of data sent to-and-from autonomous vehicles and street-side infrastructure utilizing blockchain technology will be completed in 2019’s first half.