Bitcoin and cryptocurrency as we know it was born from Satoshi Nakamoto’s dream of creating a peer-to-peer electronic cash system. The white paper proposed a system that would replace the need for central authorities like banks and financial institutions to facilitate transactions: “What is needed is an electronic payment system based on cryptographic proof instead of trust, allowing any two willing parties to transact directly with each other without the need for a trusted third party.”

While the market has evolved from what was formerly the Wild West to become a crucial vehicle for change and hope in emerging markets, it didn’t come without hurdles turned opportunities and solutions from peer-to-peer finance mechanisms offered from platforms like Paxful. The true use cases for Bitcoin, including payments, e-commerce, remittance, wealth preservation, and social good, have helped free the unbanked and underbanked populations from an economic prison by providing them with a simple way to participate in the global economy.

The three ways in which Bitcoin transformed from the Wild West into a vehicle for change includes peer-to-peer cash and trading platforms, which serve the primary goal of giving everyday people a global financial system without closed doors or artificial barriers for legitimate transactions. The human layer puts a face on the people behind the communities that are not being properly banked and are forgotten about when it comes to traditional finance. Additionally, a growing sharing economy has further brought peer-to-peer interaction front and center in hopes of growing economies worldwide.

By employing Bitcoin via peer-to-peer transactions, the true use cases have been implemented in emerging markets or places where previously unbanked communities did not have opportunities to partake in any form of financial interactions. The use cases we’ve seen provide the most prosperous pathways to economic freedom, including payments, e-commerce, remittance, wealth preservation, and social good.

Simple peer-to-peer payments via bitcoin have allowed the unbanked to buy and sell digital currency and easily transfer it to their accounts, providing emerging markets with a vessel towards financial freedom. With e-commerce on the forefront of an interconnected society, peer-to-peer trading has provided these same emerging markets with a place to become their own bosses and entrepreneurs, selling bitcoin for cash via peer-to-peer platforms. With remittance becoming a vehicle around outlandish fees for immigrants in emerging markets to send money home, peer-to-peer platforms and Bitcoin have provided a way to send digital currencies without charges. Wealth preservation in inflated countries has given these same communities another choice when it comes to debt-free capital, while social good has seen actions from Paxful from their #BuiltwithBitcoin initiative, a philanthropic project to build 100 schools in Africa. Additionally, the Bitcoin Cash Association launched an initiative where $1,000 worth of bitcoin cash is sent to the two eatBCH campaigns in Venezuela and South Sudan every month, feeding the hungry and turmoiled in both countries.

So where are we seeing the unbanked beginning to be banked? Africa has been leading the charge and we’ve seen it with the “Cheetah Generation” taking hold of their futures and vying for a better one through education, financial freedom, and the growing desire for change. With South Sudan’s inflation rate at 102% between September 2016 and September 2017 according to the World Bank, and other countries with double-digit inflation rates including Egypt, Ghana, Malawi, Mozambique, Nigeria, Zambia and Zimbabwe, the citizens of these countries have begun to take control by transacting in Bitcoin as opposed to their local currencies. 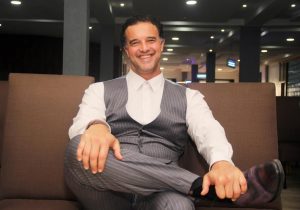 Ray Youssef, co-founder & CEO of Paxful, is a technology expert, crypto enthusiast, philanthropist and more. The hashtag ‘BuiltbyBitcoin’ is his baby. Eight years ago his IT startup had failed, his life savings were gone and he was homeless on the streets of California. He met his fellow co-founder, Estonian native Artur Schaback, in similar circumstances. Both were trying to rebuild their lives and the opportunity that is Bitcoin offered them an idea. Paxful was born, a peer-to-peer Bitcoin marketplace for people to trade gift cards, currency and alt coins without the need for banks or intermediaries. Paxful is like the uber of banking, or rather for the unbanked. #BuiltByBitcoin started as a project funded by Paxful and ZamZam water to build schools throughout Africa that provided general education but also taught these emerging markets how to use Bitcoin for financial freedom. His Paxful marketplace also offers an understanding of how in general Bitcoin can be used for good. Youssef sees Paxful delivering three valuable elements to people working in Nigeria and similar countries. ‘If they transfer their money into Bitcoin they are safeguarding their wealth.’ He says. ‘Then entrepreneurs who are buying and selling outside of Nigeria are also still able to trade — despite the online limits. Finally, Paxful is restoring business.Guest post & image via public relations firm Hokku
Previous Story