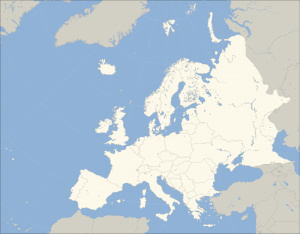 A blank map of Europe. The continental boundary to Asia indicated follows the standard convention of the crest of the Greater Caucasus, the Urals River and the Urals Mountains to the Sea of Kara.

This is part one of a three-part series of articles about the state of blockchain in Europe. The series covers the blockchain scene in some of the most important European nations. I would like to thank PR firm Wachsman for sharing with me their compilation of the facts and figures and collection of the commentaries present in this series.

In this part, we’ll be taking a look at the blockchain state of affairs in the European countries of Denmark and France.

Denmark’s blockchain firms have collectively received a substantial funding, which is expected to double this year. Direct investments in Danish blockchain startups and incumbents are estimated to be €50 million in 2018.

Concordium Foundation chairman Lars Seier Christensen said, “The Danish government is fully committed to strengthening Denmark’s position as an attractive digital hub and frontrunner in Europe with €134 million budgeted to explore the immense potential of emerging technologies as part of its Digital Growth Strategy. The government is actively looking into how these technologies can be used in digital identity, the welfare system, and healthcare, as well as how these technologies could make Danish businesses more efficient and competitive in the global marketplace.”

The “sleeping giant of blockchain in Europe,” France recently hosted the inaugural Paris Blockchain Week, an events series that took place under the joint Secretary of State for Digital Affairs and High Patronage of the French Ministry for the Economy and Finance. The largest digital assets and blockchain event in Europe was the result of French MPs calling for the government to devote €500 million on state-level blockchain technology deployments over the next three years, in an attempt to turn France into a “Blockchain Nation.”

Cédric O, France’s minister of state for the digital sector, recently said the government is open to working with digital currency platforms to allow for crypto donations for the reconstruction of the Notre Dame cathedral extensively damaged by an April 15th fire.

As for the number of blockchain startups in France, it is estimated that there are 152 of them operating in the western European country.

Paris Blockchain Week and Woorton co-founder Karim Sabba commented, “In order to reach mainstream adoption, France must foster a thriving business ecosystem in the digital assets industry, and emerging companies need to offer consumers easy-to-use products and services. The passing of PACTE nourishes the creation and development of such businesses. In most jurisdictions, digital asset businesses face enormous challenges in both setting up and operating their businesses. Anything from opening a bank account, to knowing what regulations to comply with, can become insurmountable obstacles.

“Additionally, ICO regulation is an area which is notorious for ambiguity. PACTE has established clear guidelines for businesses wishing to fundraise via public token offerings, and businesses wishing to conduct an ICO can now be assured that their fundraising is licensed by the French Financial Markets Authority (AMF). By doing so, the PACTE law will help legitimize the quality of these ICOs. Overall, PACTE will positively impact the attractiveness of France as a jurisdiction for digital asset businesses which, in turn, will serve to drive forward the adoption of digital assets amongst consumers.”

Gide255 senior advisor and Paris Blockchain Week partner Jennifer d’Hoir stated, “PACTE establishes a regulatory framework for the crypto economy that is both attractive and comprehensive — attractive because it strikes a balance between flexibility and credible rules to facilitate the interaction of this new economy with incumbent players, such as banks and institutional investors. It is also comprehensive because it addresses the entire crypto ecosystem based on the conviction that regulating both the primary and secondary markets of utility tokens is key in ensuring the efficiency of the future regime.”

She added, “This reform brings legal certainty to a community of new players who need to build trust within what has been an unregulated environment thus far. It aims to sort the wheat from the chaff and to foster innovation in France. Obtaining a visa for the issuance of tokens from the French Financial Markets Authority (AMF) should increase the ability of crypto players to develop partnerships with incumbents, such as banks, and to help prepare them for upcoming rules or regulatory adjustments that might stem from the EU in the short-to-medium term. Considering the importance of clarity and predictability in regulation, and the marketing power of a regulatory label for the sale of innovative financial instruments, this reform meets both customers’ and issuers’ expectations.”

In part two of this series, we’ll be taking a look at the blockchain scene in Gibraltar and Ireland.