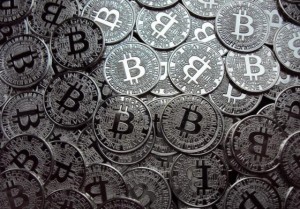 Bitcoin is a digital peer-to-peer currency that can be used in various electronic transactions.

The main concept behind Bitcoin is not that difficult to understand, however, it can be challenging to explain what Bitcoin really is.

I want you to close your eyes and imagine a bunch of workers mining for gold. It’s dark, damp, dirty, hot, and even worse; the cave can collapse at any minute. Let’s try to make this fair, shall we? The one who digs the fastest gets more gold than the others since he is the most efficient. Seems pretty reasonable so far right?

There is a similar concept in Bitcoin, except there is no physical labor involved and you don’t have to worry about risking your life (unless you recklessly took out your life savings and put it all into mining hardware…no guarantees then). Computers around the world are miners that race to solve a complex mathematical equation (or the “gold”). The fastest computer gets the most out of this race. Currently a solved equation or “block’ gives 25 bitcoins as a reward for solving it; the fastest computers/miners get the biggest part of the deal.

Let’s go back to the gold miners for a minute. The most efficient miner probably has a family to take care of or just has ordinary daily needs to fulfill in which he/she spends the gold on. It’s easier to track how much gold is in circulation if everyone is in the same location. But, what if he decides to quit his job and leave the town? What if the other miners decide to do the same? These people are now spending their gold on different things in different locations. But, who will keep track of the amount of gold they spend, and what is the proof the transactions they made were fair?

They could write it down in a ledger, but that would mean each ex-miner has his/her own ledger. This seems reasonable, but what is the guarantee the ledger is even fair and no one cheated? For this, they could have an appointed person to keep track of their money dealings, but then again, why go through a third-party?

Bitcoin offers a simple solution to this problem. Instead of each miner having their own separate ledgers, there is a public ledger called “blockchain” which is made available online that keeps track of every finalized transaction. This means that one does not need a third-party to witness every purchase. In addition, when there is a public ledger, it becomes nearly impossible to cheat anyone since each new addition to the ledger is made visible to all. However, your identity is kept hidden so you don’t have to worry about any midnight stalkers.

An example to make things easier:  You can buy something from Person A, and not need person B to make sure everything is fair because your deal with Person A is made available to everyone. However, your identity is kept secured and pretty much anonymous.

Enough with the logistics…do I get real coins at the end?

Nope, bitcoins are a virtual form of currency. This means that there is no physical handling of coins or bills; the money is digital. When computers mine for the coins, they get digital currency, not paper money. The thing about bitcoins is that they are created without any debt attached to them. This is unlike the USD where whenever new bills are created, the total debt increases.

But, that means bitcoins are not “real” money! I’m going to go invest in something else…

You have every right to invest in something else, but don’t be so quick to judge. It’s true that bitcoins do not have any physical manifestation, but they can be used to buy goods online, to trade, to send money to family and friends, and more. In this regard, even though Bitcoin is a digital form of currency, it works like paper money except the transactions are online or virtual.

Okay that seems plausible, but, who controls Bitcoin? There has got to be a head honcho.

Sorry to burst your bubble, but no one controls Bitcoin. The innovative thing about Bitcoin is that it’s decentralized. This means that no one has the power to control any aspect of it. It’s literally self-sufficient and no government has command over it. Instead, the completed transactions are noted on a public ledger which everyone can see. In addition, the transactions are peer-to-peer which translates to: Person A is conducting a business deal with Person B in which there is no third-party involved. This can be appealing to people who do not wish to have a middle man or to pay unnecessary taxes.

No head honcho? So, how many bitcoins are there?

There can only be 21 million bitcoins that will ever be mined. This may seem limiting, however, bitcoins can be divvied up into smaller quantities that can be used during transactions. The smallest amount that a bitcoin can be divided into is one hundred millionth of a bitcoin…that’s really tiny! But, even this tiny number, known as a Satoshi, holds monetary value that can be used for something.

Why is the smallest amount referred to as a Satoshi?

The smallest amount was named Satoshi after the Bitcoin founder: Satoshi Nakamoto. Not much is known about this fellow since he doesn’t wish to be known at the moment. It’s understandable why, even though one would think the person who made Bitcoin would want some share in the lime light. Wouldn’t you?

I’ve heard Bitcoin is too risky…volatile even

Even with the risk factor, Bitcoin still comes with overwhelming benefits. The peer-to-peer transaction, low fees, and many other things that can’t be beat. Besides, with any great thing in life, some risks have to be taken right?

Could you explain the benefits in detail?

To explain some of the advantages briefly, with bitcoins: