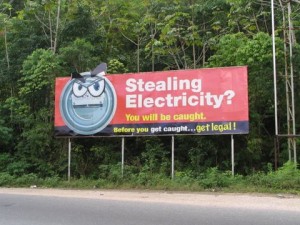 Mining for bitcoin at one point in time was very easy and did not require much electricity or that much computer power. As the digital currency is becoming more widespread, mining for the coins is also becoming difficult. Much energy and proficient computers with well-equipped power is needed to mine for bitcoins. One bitcoin user allegedly used another person’s electricity to power his own computer to mine for the digital currency.

Dutch News channels reported the incident and revealed that a 43 year old resident living in a city in the Netherlands called Tilburg was arrested on the charges of stealing electricity to power 21 mining computer machines.

The suspect was not only taken in to custody by the police for stealing electricity but also for money laundering allegations. The mining machines have been confiscated by the authorities and are now being examined to find evidence of other illegal activities.

The number of bitcoins mined using the stolen electricity has not been disclosed by the police. Furthermore, it is not yet known for how long this bitcoin mining operation was being conducted for.

In another similar news this week, hackers invaded the average security cameras with malware and then used a company’s hardware to mine for bitcoins. This incident occurred at the SANS Technology Institute.

Johannes Ullrich, an instructor at the SANS Technology Institute wrote,

“Analysis of the malware is still ongoing, and any help is appreciated. Here are some initial findings: The malware is an ARM Binary, indicating that it is targeting devices, not your typical x86 Linux server. The malware scans for Synology devices exposed on port 500.”

A gaming company, last year, was fined with $1 million for having used players’ computers to mine for bitcoin. The company later confirmed that it did in fact experiment with its own software by adding bitcoin code to it. An engineer working for the company distributed it to customers. Then, he deposited approximately $4,000 in bitcoins to his personal bank account.

Apparently, some individuals are getting the idea that it is alright to mine for bitcoins using illegitimate means.

People, …use your own appliances and electricity! To everyone, happy and safe mining!