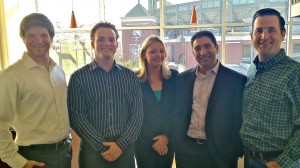 BitPay has issued a release stating that the payment processing center has opened new offices in San Francisco and New York.

BitPay originated as an Atlanta-based company, and has gained more than 26,000 merchants who accept digital currency payments through the bitcoin service. The company has also grown in number in term of staff members. BitPay has 22 employees based in Atlants, 6 in Argentina, 2 in San Francisco and 1 in New York.

“BitPay has many merchants accepting bitcoin throughout Silicon Valley so we are thrilled to extend our exceptional sales and customer support by opening an office in San Francisco. We look forward to expanding into various markets both here in the U.S. and internationally.”

Freeman, along with the leader of BitPay’s Client Development, John Dreyzehner, are located in the San Francisco office. Dreyzehner earned his Bachelor’s Degree in Financial Mathematics from the University of Virginia.

As for the company’s New York City branch, Andy Goldstein has been hired as the Regional Sales Manager. Goldstein has worked with Visa Inc. for 15 years, serving as a Senior Business Developer. He will be responsible for BitPay’s eastern American and eastern Canadian merchant accounts.

As for Eric Martindale, he will work between both the San Francisco and New York offices as the company’s Development Evangelist. Martindale’s contributions to BitPay have focused on API development, company hackathons and various other open source community opportunities.

This week, BitPay will have a prescence at the Game Developers Conference in booth 112. The conference will last between March 17th and March 21st.  The payment processing company is also the platinum sponsor for Coin Summit, which takes place between March 25th and March 26th.

Additionally, BitPay will be sponsoring New York’s Inside Bitcoins event at the Jacob Javis Center on April 7th and April 8th. The event will focus on FinTech business trends, investment strategies and opportunities, and issues the digital currency community faces.

Speakers at the event will include professionals from American Banker, Coinsetter, Bitcoin Foundation and BitInstant.