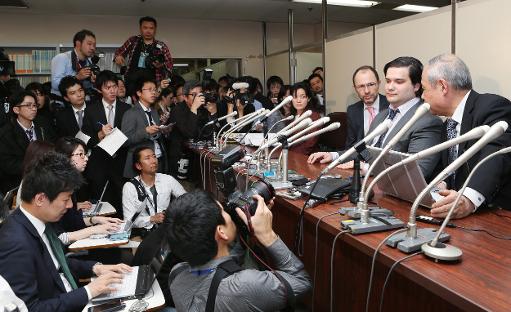 After having filed for bankruptcy protection just last week, MtGox announced yesterday, March 2nd, the opening of a call center on its website.

Falling apart, the troubled exchange filed for bankruptcy protection with the Tokyo District Court Friday. Approximately 750,000 bitcoins belonging to its customers and 100,000 of its own have been lost. The total worth of the loss of bitcoin reaches about $500 million.

MtGox has a remaining debt of approximately $63.6 million. No plan of action has been outlined by the exchange as it still remains hush hush about what it plans to do to fix the damage it has caused.

Mark Karpeles, CEO of Mt. Gox, having avoided the public eye for some time finally re-surfaced at a news conference on Friday. He revealed the degree of the misfortune and continued to apologize to his customers.

Karpeles admitted to having defects in MtGox’s network which made the exchange vulnerable to outside interference.

The call center is a way for Mt. Gox to try to rectify its affair with its very much angered customers. It appears to be a step in the right direction but time will tell.

Mt. Gox, based in Tokyo Japan, posted on its website that a call center has been set up to “respond to all inquiries.” The post, written in both English and Japanese, was quick and to the point. The telephone number for the call center is +81-3-4588-3921. The call hours are 0100 GMT to 0800 GMT, Monday through Friday.

The call center has been prepared to open up today, March 3rd. To the Mt. Gox customers out there, we hope this initiative aids in providing you with some form of relief and comfort!

Let us know in the comment section below, if anyone was able to receive a legitimate answer from the exchange about their inquiries.