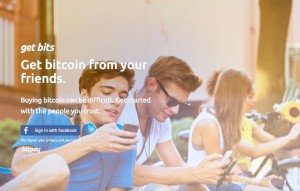 On Thursday, BitPay introduced a new Facebook application called “Get Bits,” which allows users interested in Bitcoin to get the cryptocurrency from their friends over the social networking site.

In announcing the new app on its blog, BitPay said:

“We’re always looking to grow the Bitcoin space, and buying bitcoin can be the biggest hurdle to getting started. Get Bits is an easy way for newcomers to get bitcoin through their Facebook friends. As we release the API — and ultimately, standardize the decentralized protocol — Get Bits can be integrated into wallets to facilitate peer-to-peer exchange.”

“There have been exciting developments in decentralized exchange, but we still have a lot of work to do. Because Bitcoin is one of the only forms of payment which cannot be fraudulently reversed, selling bitcoin usually requires some level of trust in the buyer. To deal with this, Get Bits currently leverages the world’s largest ‘web of trust’, Facebook. As better decentralized solutions emerge, Get Bits will continue to evolve.”

BitPay concluded its announcement of the new app, saying:

“We’re huge fans of privacy, and we’re vehemently against tracking bitcoin users or their activity against their will — that’s why we operate on-chain. But if you’re like us, both Facebook and the NSA already know you have bitcoin — why not let your friends in on it too?”