“‘When will you get an ATM?’ is probably the most frequently asked question we get,” said Bitcoin Embassy executive director Guillaume Babin-Tremblay. 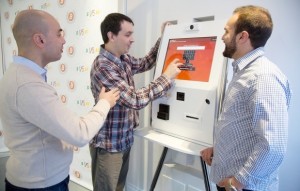 Well, wait no more Motreal because bitcoin ATM are coming near you or have they already. Montreal Bitcoin Embassy has excitedly presented its first official Bitcoin ATM to the public on Wednesday. The owner of the machine, Fadi Azouz, has big hopes for what it will represent and bring to the community at large.

Azouz, owner of the company Vx5 Technologies, only just started making serious investments in bitcoin. He heard about the coin for the first time back in September. Talking about his digital currency ATM he said, “What it really is, is a bitcoin vending machine. It buys bitcoins and it sells bitcoins.”

Jean-Marc Jacobson, founder of the Bitcoin Embassy, established the non- profit organization during last August. When it comes to taking the leap in bit-business, Jacobson has definitely proven that he can and has.

The structure serving as the embassy is a three floor strucuture located on St. Laurent Boulevard just above Sherbrooke Street. Azouz will house his ATM there making it now open for business.

BitAccess, based in Ottawa are the manufacturers of bitcoin ATMs, are feeling the success in the spread of the machines.

Currently, the company only has machines in Ottawa and Toronto. The company’s co-founder Abdul Haseeb Awan says that they plan to launch many more in the month of February. The goal is to reach places such as Winnipeg, London, Ontario, Mexico City, Geneva, Sydney and Melbourne.

Awan comments “We are very excited with our launch in Montreal, making it the third city with BitAccess.”

Azouz plans to introduce and completely setup ten BitAccess ATMs in 2014. His goals are to personally travel to each location to see that the machines are up and running. The locations, you might ask, are Caracas, Beirut, Dubai, Dubrovnik and Manila, among other cities. Big goals, they are, but promising nonetheless.

BitAccess ATMs will function with multiple exchanges, Azouz says, to get the buyers and sellers the best prices imaginable in real time. He hopes to make profit by charging a 3 to 5 cent fee per transaction. At this point, the further ease of dealing with bitcoin would be unmatachable with the negligible fee.

Bitcoin is making its way faster than expected into public daily lives. The digital currency barely amounting to a few cents back when it initially started has picked up steam quite rapidly.

Many are taking this opportunity to jump on board to have a share of the pie. To all the Bitcoin-ers out there, bon appétite.