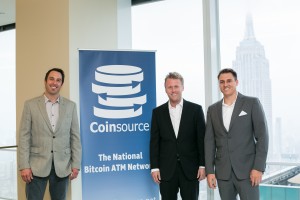 Fort Worth, Texas-based Coinsource, the largest bitcoin ATM network in the world, announced in a press release CoinReport received that it has surpassed the 100 bitcoin ATM milestone following a Q1 expansion in New York, installing 14 machines in the state since January.

The company, which was founded in 2015, is now the first bitcoin ATM firm to pass the 100 BTC ATM mark. The number of their machines increased from 70 at the start of the year to 103 now. In New York, they control 36% of the market, operating 30 of the 83 machines in the NYC area.

“New York will always have a special place in our heart because it was the origin of our first successful bitcoin ATM, and we are proud to offer the lowest rates in this market,” said Coinsource co-founder and CEO Sheffield Clark.

“Bitcoin has been on a tremendous bull run this year too, up about 30%, so clientele is growing fast. In fact, bitcoin just broke its record high of $1327 USD (Coindesk index), this morning hitting $1328.06 per. Our job is to keep providing customers with convenience and instant access to the world’s highest performing currency, across all hours of the day and night, which is rather appropriate for the city that never sleeps.”

With the addition of the 14 ATMs, New York has become Coinsource’s second largest state market, behind California, which has the company’s 34 machines. The first-ever bitcoin ATM in the John F. Kennedy International Airport, the fifth busiest airport in the U.S. by passenger traffic, is one of the 14-machine bulk installation. A couple of two-way ATMs that provide New York residents the opportunity to sell bitcoin for cash directly from the machine in addition to buying it also include the latest batch.

Clark added, “Breaking triple digits was earmarked as one of our main goals for our five-year business plan, but we’ve reached it several years earlier than expected. We have many more surprises in the pipeline for 2017, and are currently conducting the groundwork for rapid expansion across the country.”

Outside of New York, new kiosks can be found in the Los Angeles area, where Coinsource installed three more ATMs this week, one each in Anaheim, North Hollywood and Winnetka. Moreover, New Jersey’s Jersey City got one too.