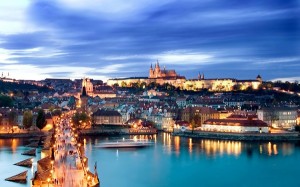 It has been announced that European city Prague will be installing RoboCoin ATMs. The unique thing about this ATM is that unlike other Bitcoin operators, this allows one to sell bitcoins and also purchase them. This is pretty useful if you have a couple of coins on hand and wish for fast money without using the internet for an exchange which could take a few days to finalize.

After signing a contract with RoboCoin Technologies LLC, an American Company in Nevada, Marlyle Ltd, a Czech company, invested 1.5 million Kc into the new ATMs. Three RoboCoin machines have been ordered by Marlyle, and the first is to be situated in Prague. Even though the transaction will be easy to do, a specialist might also be available to assist users in making the exchange as smooth as possible. April 2014 is slated as the month in which the first transactions will occur.

“We believe that this versatile and customer oriented service makes trading with virtual currency available to people who are thinking about it today, but haven’t taken active steps yet because of the fear of technical difficulties or concerns about the safety of their investments.”

RoboCoin Part of a Large-scale Project

Stransky also says that installing RoboCoin in Prague is part of a project whose goal is to design a world-wide service that will allow users to safely store Bitcoins and other virtual currencies. This also may include protection against theft or loss. RoboCoin ensures an environment in which customers can make purchases easily, and exchange bitcoins with ease that other ATMs are currently unable to do.

Up until this moment, it was only possible to sell bitcoins through exchanges, but with this technology users can sell their coins on the streets of Prague. Another advantage of RoboCoin is its ability to collect the finances from the user immediately and there is no delay or need to wait for a few days before the account is updated.

RoboCoin is a step towards more innovation in technology. It is said that more information regarding this extensive project will be told in February.

From Commodities to Assets: Scandinavia Bitcoin