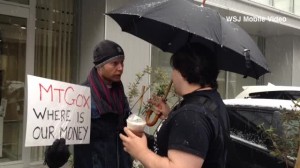 The failing bitcoin exchange Mt. Gox’s CEO Mark Karpeles has spoken through a web chat revealing little about what is going on with the exchange. He told an industry consultant on Tuesday that he has no plan of calling it quits regarding the troubled exchange. Furthermore, he commented that he does not have any plans of stepping down from his position at the exchange.

This afternoon, Karpeles made the statements in an Internet Relay Chat (IRC) to Jon Fisher, an industry consultant who is based in New York. Private chat messages were acquired by FOX Business.

According to Karpeles, he is still in Tokyo. His proof? He sent a photo link of his keyboard and cat. That was his proof that he is still in residence at his home.

“We Haven’t Given Up”

Karpeles states at one point to Fisher “Giving up is not part of how I usually do things.”  Apparently, Karpeles still believes that he can do something for the falling Mt. Gox bitcoin exchange which was once considered to be on top of the bitcoin world. He stated that the people working at Mt. Gox “have not given up.” These new statements just add to the brewing pot of confusion enveloping Mt. Gox. Even though on the surface, it appears that Karpeles is finally speaking about his failing exchange, not much is revealed through the course of the chat. Again, this is not surprising because it lives up to the previous failed attempts of answers that people tried to gain from him.

No substantial proofs have been given to actually support these new statements made by Karpeles. They appear to be empty words like it has turned out in the past. He does not outline the course of action that the exchange is taking to recover and get back up again. Having done that would have on some level, possibly, comforted the people that invested so much in to the Mt. Gox exchange!

When asked if he lost money in this fiasco, Karpeles stated “well, technically speaking it’s not ‘lost’ just yet” and that the coins are “just temporarily unavailable.” Let us see if Karpeles will actually live up to his words now, as he has not throughout this entire ordeal.

An online document which apparently seemed to have been originated from within the Mt. Gox network appeared on the internet this Monday night. Having been entitled “Crisis Strategy Draft”, it was published by a blogger with the name of “The Two-Bit Idiot.” The Wall Street Journal discovered the identity of the blogger who happens to be Roger Selkis. In the report, it mentioned that 744,408 bitcoin have been lost because of the Mt. Gox fiasco.

Karpeles denied the speculation that the document was produced by Mt. Gox. He stated “this document was not produced by Mt. Gox.” But when asked about the legitimacy of the document, he stated that it was “more or less” legitimate. He continues to circle the issue at hand and does not address much of anything. Karpeles said, “As the name suggests it’s a draft, and it’s a bunch of proposals to deal with the issue at hand, not things that are actually planned and/or done.”

The Mt. Gox exchange website became unavailable two days ago and is still down. A new message by Karpeles has been posted on the site stating that he is “still in Japan, and working very hard with the support of different parties to find a solution to our recent issues.”

He further continues to write that people should withhold from asking any questions to the Mt. Gox staff because “they have been instructed not ot given any response or information.” Well, this seems business as usual for the people at Mt. Gox. Withholding useful information apparently has become the thing Mt. Gox lives up to.

Karpeles was questioned by Reuters through email about the state of the Mt. Gox exchange and he replied,

“We should have an official announcement ready soon-ish. We are currently at a turning point for the business. I can’t tell much more for now as this also involves other parties.”

Well folks, you have read it. The state of the failing exchange will be revealed “soon-ish.” Hopefully this time, it really is “soon-ish” but don’t hold your breath.

With all the “not giving up” talk from Mr. Karpeles, we couldn’t help but share this.