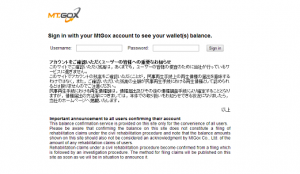 Placed some coins into MtGox, but are wondering how many? The MtGox website is now allowing users to check their account balance to see how many bitcoins they have.

The ex-Bitcoin exchange has slightly updated its homepage to show a login screen and a message that is inviting users to login so that they can check their account balances. The message reads:

This basically means that users can check their account balance, but it will not do much for anything other than personal confirmation. In addition, this is a reference to MtGox’s bankruptcy case and the Japanese Civil Rehabilitation Law. These are counting the ex-Bitcoin exchange’s assets in order to come up with a liquidation value.

MtGox Users in For the Long Haul

MtGox users with Bitcoin might be able to get a portion of their wallet’s worth based on the final totals of the exchange’s assets. MtGox’s website also reads,

Rehabilitation claims under a civil rehabilitation procedure become confirmed from a filing which is followed by an investigation procedure. The method for filing claims will be published on this site as soon as we will be in situation to announce it.

MtGox users will be allowed to file claims against MtGox in order to get some of their money back. This is good news since it means that the Bitcoin community can hope for some sort of justice from the MtGox debacle.

One might wonder, however, since MtGox claimed that it had lost 750,000 of its users’ bitcoins and 100,000 of its own, how will the users be able to see coins that are lost? Perhaps the wallets will show the account balances before the bitcoins were lost.

Or mayhap, the bitcoins are not entirely lost. Hackers had recently taken over Mark Karpeles’ reddit and blog account to post what they had found out. They’d written on the blog,

The hackers reported that according to MtGox’s data, the exchange had 951,116.21905382 bitcoins in its system. This implies that MtGox could have the remaining hundred thousand bitcoins. This could possibly mean that MtGox omitted some important facts.

All in all, it is good that users can finally see their account balance on MtGox’s website, however, it doesn’t solve the entire problem. It is comforting to see numbers inside one’s wallet, but, the guarantee of getting one’s coins back seems slim to none. One may, however, be able to receive some percentage of their Bitcoin wallet worth in proportion to MtGox’s total assets.

Only time will tell how this will play out. Stick to Coinreport for further information.