By : Jonathan Kinsley
Comment: 0
Tag: bitcoin foundation, mtgox, round up

Mark Karpeles, CEO of Mt.Gox, has resigned from his position of being one of the the board of directors on the Bitcoin Foundation. The announcement posted on the Foundation’s own website stated:

“Effective immediately, Mt. Gox has submitted their resignation from the board of directors. We are grateful for their early and valuable contributions as a founding member in launching the Bitcoin Foundation.”

The Bitcoin Foundation further stated “MtGox Co. Ltd. (Japan) held one of the three elected industry member seats. Further details, including election procedures, will be forthcoming.” A plan seems to be already in the works to elect a new board member.

Mt.Gox has not yet made any announcement of their own on their website.

Since earlier this month, Mt.Gox has come under fire from its customers and the rest of the bitcoin community at large for legitimate reasons.

At first, withdrawal transactions were suspended on its website. Then to make matters worse, there was not much communication happening between Mt.Gox and its customers leading to rising frustrations at the bitcoin exchange. When statement was finally issued by the exchange, they ultimately blamed the bitcoin protocol itself for the exchange’s woes. 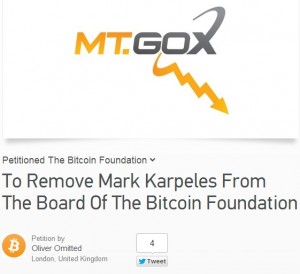 About two weeks ago, a petition was created on change.org by ‘Oliver Omitted’ from the United Kingdom to remove Karpeles from his seat on the Bitcoin Foundation. This petition represents the negative feelings that bitcoin users have developed toward Karpeles as a result of his dealing with his customers. It stated:

“Mark Karpeles, CEO Of Mt Gox has continually proven himself to be incompetent, causing fear in the community and damaging the trust signals that Bitcoin relies on so as to be taken seriously.”

It is obvious that evasion of information and ambiguity does not garner support.

Continuing to address frustrations with the exchange, the petition stated “Mt Gox has encountered over the previous years, this week Mark Karpeles irresponsibly released information stating that the issues the company were facing with withdrawals were due to ‘A bug in the Bitcoin software’ something which was disputed by Gavin Andresen.”

The petition quickly gained support from the bitcoin community. The goal was set to obtain a thousand signatures. But, in actuality, closer to 2000 signatures were obtained to date. It has not yet been revealed whether this petition was part of the reason for Karpeles resigning from the Bitcoin Foundation.

Where are the Tweets?

What comes as yet another very unsettling news for Mt.Gox’s customers, the exchange has deleted all tweets it ever made on its official Twitter page. Even though all of the 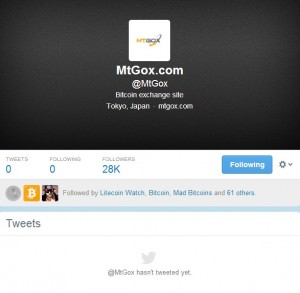 posts seem to have been deleted, the account still remains intact and visible in all its glory.

The missing tweets came to attention shortly after the announcement was made by the Foundation of Karpeles’ resignation from the board.

The bitcoin exchange has already received a lot of criticism for its lack of proper communication with its customers, who have invested much into the exchange. Speculations about the exchange’s unclear dealings have already become widespread. This added news does not help in rectifying the image of Mt.Gox to its customers or the bitcoin community.

However, at the same time the bitcoin community and more importantly the Mt.Gox customer are still waiting for a clear cut answer and solution from the exchange.

No exact explanation has been given as of yet for why Karpeles resigned from the Foundation. One can speculate it has something to do with the continuing problems that the bitcoin exchange has been going through. It has become accepted in the bitcoin community that the recent drop in price of bitcoin has largely to do with Mt.Gox’s problems and inefficiency to fix them quickly.

New developments regarding Mt. Gox will be posted here on CoinReport, so stay tuned!