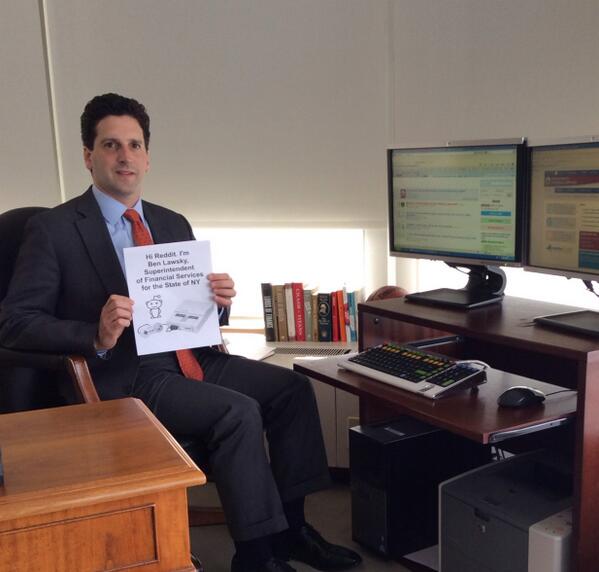 New York City regulator and superintendent of financial services Benjamin M. Lawsky, took to Reddit to introduce himself to the bitcoin community.

He thanked those who requested that he do an AMA on his agency. An AMA is an uncommon role taken in one’s life, and requires proof to be included within the post’s text.

Lawsky says that the New York Department of Financial Services is doing an overview on ruling for digital currencies.

He says that the NYDFS agency is still formulating how to take on the regulatory process. However, Lawsky says he welcomes all questions, and that he will try to answer questions as best as he can, eventhough he can not discuss any definitive answers on the subject.

The agency is taking bitcoin’s regulation process into serious account without any prejudgments.

The NYDFS conducts inquiries to decide which regulations and guidelines digital currencies will abide by. Hearings were conducted this past January, and over 14,000 people from 117 different countries tuned into the 2-day hearings online. Lawsky says that the turnout from the online bitcoin community was more than the agency ever could have expected.

Just last week, the agency released an outline of thoughts and ideas for regulations.

As for the agency’s expectations for 2014, Lawsky writes:

“We want to move expeditiously because the sooner we provide some regulatory certainty, the better for the firms that want to know what the rules of the road are.”

Lawsky then says that the agency is taking their time on decisions, as they don’t want to overlook any pressing issues that may cause a backlash in the future.

In addition to the NYDFS’s cooperation with the bitcoin community, Lawsky says that getting feedback from users and regulators alike will allow for a better decision overall.

He concluded his post by asking the Reddit bitcoin community some questions such as, what users personally found as the most important application for virtual currency, and where they thought the market was headed in the long term.

One Reddit user asked Lawsky why he felt banks were closing accounts associated with bitcoin, and if his proposed regulation would address the issue. Lawsky replied, saying that it could be likely due to the recent money laundering cases.

Also, Lawsky said that the coin’s volatility seems to be a factor in bank’s hesitation to accept a new form of currency. Bitcoin has yet to establish a leveled value.

A video response to the Reddit community’s questions and comments was also released as a thank you by Lawsky. He will also double-back to his Reddit post to answer updated questions and concerns.