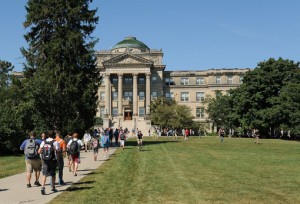 Hackers compromised servers containing social security numbers of around 30,000 Iowa State University students in order to get enough power to mine for Bitcoin. The university released a statement saying that even though this occurred, there is no evidence that the personal information on the files were accessed by the hackers. Senior Vice President and Provost Jonathan Wickert said,

“We don’t believe our students’ personal information was a target in this incident, but it was exposed.”

Even though, evidence did not indicate that financial files were accessed, Jonathan Wickert said,

“We have notified law enforcement and we are contacting and encouraging those whose Social Security numbers were on the compromised servers to monitor their financial reports.”

The information technology(IT) staff found that five college department servers were breached. These servers had files that consisted of university ID numbers and social securities of students who have taken world languages and cultures, material science and engineering, and computer science classes at the University from 1995 through 2012.

29,780 social security numbers and 18,949 university IDs were exposed because of the hacking. However, there were no personal financial records on those files. Those students, whose identity and information may have been compromised, are being notified by the college during this week.

An identity protection firm, AllClear, has been hired by the college to help out with the situation. The Iowa State University is also buying a year of credit monitoring with an option for a second year of monitoring for the students whose social security numbers were revealed in the breach. Jonathan Wickert said,

“Iowa State has always taken information security very seriously, and we will continue to take every possible action to safeguard the personal information of those who learn and work here.”

The hacked servers have been deleted by the university and others of similar nature have been taken off in order to be updated with software that can prevent hacking. Wickert comments,

“We have well-regarded cyber defense experts here who not only protect university data, but educate others on how to prevent computer attacks. Unfortunately, Iowa State is not immune to hacking, but we are disappointed and sorry for the inconvenience this incident may cause.”