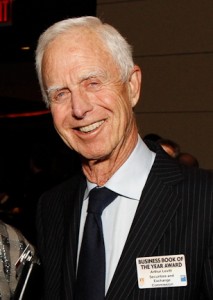 The Wall Street Journal reports that Arthur Levitt, who served as chairman of the Securities and Exchange Commission from 1993 to 2002, is joining the advisory boards of BitPay and Vaurum.

As an adviser to BitPay, a Bitcoin payment processor, and Vaurum, a Bitcoin exchange for institutional investors, Levitt said he hopes to “help them understand the imperative of a robust approach to regulation” if Bitcoin is to fulfill its promise to further jolt the finance realm.

One of the highest-profile members of the American financial establishment to work in the digital currency sector, Levitt told the Wall Street Journal that he was drawn to the industry by the innovative energy of the young individuals behind it, a group whom he described as always “thinking beyond the box.”

“The intellectual firepower behind [bitcoin] enterprises is astonishing,” said Levitt to the newspaper. “But I think in terms of compliance and regulations, they are relatively immature.”

Levitt said Bitcoin requires regulation to foster trust among the broader population and drive adoption. He said Bitcoin-oriented companies “must have as their top priority a greater public understanding of what bitcoin is, how it works,” and of the improvement the digital currency brings by “imposing competitiveness on establishment practices and procedures.”

In an interview with CoinDesk, Vaurum CEO said Levitt’s appointment would help with general acceptance of Bitcoin.

He told CoinDesk, “Blockchain technology is poised to transform the financial services world, but will continue to remain an intellectual curiosity until it has a compelling everyday use case. Arthur Levitt brings additional validation to the space, and we’re pleased to work with him on our financial controls, banking relationships and regulatory compliance.”

The Wall Street Journal reports that Levitt’s appointments to BitPay’s and Vaurum’s advisory boards come at a crucial time for Bitcoin. After the digital currency rallied 9,100 percent against the US dollar in the 12 months to December 2013, its price has since dropped by 70 percent from the peak, due in part to regulatory uncertainty.

Why Google Ventures Is Backing the LedgerX Bitcoin Futures Exchange