The Silk Road was, for the duration of its existence, something of a poster child for the cryptanarchist movement. The service provided a way for users to move goods and money amongst themselves without the possibility of violence or the intervention of law enforcement. Its role in the international drug economy probably saved a lot of lives.

In order to avoid the law enforcement arms of various national governments, the Silk Road depended on the Tor network, an infrastructure for anonymizing the paths of messages sent through the network, to make it impossible to determine not just the contents of the messages exchanged, but also the identities of the people exchanging them. Unfortunately, Tor does not protect the user from human error, and it was shut down earlier this year when its administrator made several critical security errors, leading to his arrest and the closure of the site.

While this sort of mistake could have been avoided, there were plenty of other things that could have gone wrong. The operator of the Silk Road could have scarpered with the money, or been hacked, or been an FBI agent, or unexpectedly died, or a dozen other things. One of the unfortunate side-effects of evading law enforcement is that there’s no one to enforce contracts or punish fraud. The human side of these sorts of extra-legal services will always be the weak link. 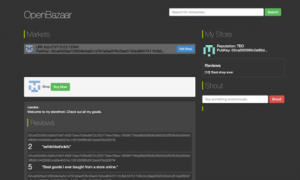 Enter OpenBazaar (formerly known as ‘DarkMarket’). OpenBazaar is an upcoming successor service to the Silk Road, a service that allows its users to anonymously buy and sell goods from another from anywhere in the world. The neat part is that OpenBazaar is completely decentralized, like the Bitcoin network itself: the process of locating listings of goods and services, looking up seller ratings, making transactions, and even arbitrating disputes are entirely decentralized. Each user hosts their own storefront (which will eventually be anonymized via the Tor network), and the OpenBazaar service just links those storefronts together and connects them to users who want to buy from them. Because there’s no centralized service, there’s nothing for law enforcement to shut down, and no single human whose error can tank or sabotage the platform — OpenBazaar will always exist so long as people want to use it, and it will always behave consistently (as defined by its open-source protocol code).

OpenBazaar is an example of a Distributed Autonomous Corporation (or a “DAC”) – a virtual, decentralized service that interacts with the economy (and can even, in theory, turn a profit), but which is not controlled by a single person, or even by a group of shareholders. It’s hosted by a collection of people who implement nodes in its distributed network, and who it incentivizes in some way to provide that service (a process that’s become much easier with the creation of Bitcoin). DACs are powerful, because they can be absolutely trustworthy — anyone can read their protocol or audit their code, and verify that they will behave in expected ways. Furthermore, DACs exist in no particular jurisdiction, have no identifiable physical presence, and no centralized authority capable of disabling them in the event of a legal crackdown. As a result, DACs are essentially immune from law enforcement intervention, meaning that they can be used for activities that are illegal in some jurisdictions.

A number of “next generation” Bitcoin competitors are implementing tools to make DACs more flexible and easier to create. For example, Ethereum plans to implement a Turing-complete scripting language that can be used to associate code with transactions, essentially creating autonomous blockchain robots that can send and receive money to multiple parties in a robust, dependable way. Blockchain robots like these could be used as autonomous lawyers, to dispense trusts and enforce contracts. They could also be casinos, implementing games and lotteries that users can know are trustworthy. They could even be used as banks that users can prove aren’t operating on a fractional reserve basis, as well as stock exchanges and money changers.

The possibilities for DACs are endless. As a trivial example, right now a number of different Bitcoin organizations use proof-of-burn to create incentives for users – an irresponsible system involving the permanent loss or destruction of Bitcoins – that might contribute to a liquidity crisis down the line. Instead, you could construct a blockchain robot that simply took money from users and gave it back to them a year later (proof-of-cold-storage) or distributed it evenly to random cryptocurrency miners. Whole industries could be placed in the hands of provably trustworthy blockchain robots, and it would be difficult for conventional corporations to compete (you can never completely trust people, but you can trust math). Companies a decade or two down the line may prefer to leave many of their disputes in the hands of autonomous lawyers, rather than trusting the law-enforcement apparatus of a particular nation to get it right, even if they aren’t actively trying to avoid law enforcement like OpenBazaar drug dealers.

From a law-enforcement perspective, the next few decades are probably going to be intensely frustrating, as conventional law enforcement tools try and fail to deal with the growth of DACs. We may see losses of freedom in other areas (like mail privacy and open source software development) in an attempt to make up lost ground. DACs will make it easier to buy and sell contraband (including drugs, arms dealing, and, unfortunately, human trafficking). It will make financial regulation of the kind Ben Lawsky has in mind essentially unenforceable). They’ll probably spell the final end of the war on drugs and gun control rules. On the other hand, DACs may help to protect people from financial crimes: DACs can’t commit fraud, and when they take potentially economy-ruining risks, they do so in a transparent way. Open-source financial citizens are responsible by design.

As we look forward into the future, we can imagine a world in which an unregulated shadow economy exists alongside the mainstream economy, enforced by smart contracts, almost entirely illegal, in which many of the most important services are provided by trustworthy blockchain robots. At first, it’s used almost exclusively by criminals, but as time goes on, more and more people and organizations begin to depend on the shadow economy as it becomes clear to them that their local government simply can’t compete with the DACs on price and service.

This future is by no means a certainty — technical and logistical problems could put a stop to it pretty fast — but it is a possibility, and that should excite you enormously.