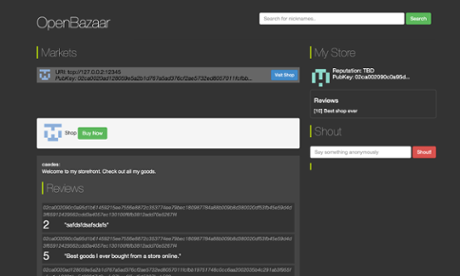 DarkMarket, the successor to black market site Silk Road, has been renamed as the OpenBazaar. The website has aimed towards creating a decentralized online marketplace.

The name change was made in order to lighten up the site’s image.

Originally, DarkMarket was created during a Toronto Hackathon competition, winning the developers a $20,000 prize for the idea.

The software allows users to transact from peer-to-peer, while keeping true identities private. A third party user of the site acts as a controller of the funds, releasing them when a transaction is complete. Similar to most retail sites, a ratings feedback system tells users which sellers and buyers have good or bad reputations.

The operation gets most of its inspiration from how Silk Road was structured, however, there is one major difference. There is no owner of the market.

It is said that law enforcement won’t be able to close down the market as it did with Silk Road, since there is no one target. Every individual on the site would have to be arrested for it to be forced down. This is a seemingly impossible task to achieve.

The original creators of DarkMarket no longer have any association with the operation.

Before the name was changed to OpenBazaar, the Reddit bitcoin community was hoping to see DarkMarket become the Free Market. The original post reads:

“The free market is an online exchange where anything can be traded tax free. Governments are attempting to come down hard against the free market. By renaming the exchange it will FORCE a philosophical conversation about rights upon any explanation in the mainstream media.”

One of the DarkMarket’s developers, Amir Taaki, replied to the post, saying:

“People need to stop being afraid and reclaim these words of power used to control us. The Dark name evokes great imagery and sounds cool. It’s like when they used to call us pirates to shame us and the pirate party stood up and said, ‘Yeah! we are pirates!”

Taaki states that the market wasn’t intended to follow rules or play nice. In his opinion, it was meant to challenge the status quo.