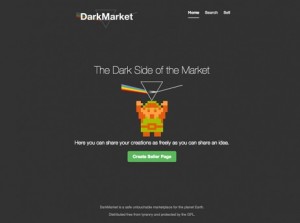 Silk Road is known to be one of the main reasons bitcoin has such a negative standing in the eye of the public. The black market site was closed down in October 2013 for its involvement in criminal activities, such as money laundering and the sale of illegal drugs.

Now, DarkMarket looks to pick up right where Silk Road left off.

DarkMarket prides itself as the successor to Silk Road, and the creators boldly claim it to be completely invulnerable to the federal government. Government investigations led to the demise of Silk Road, not too long ago.

Created during the Toronto Bitcoin Hackathon, DarkMarket won first prize and $20,000. The reason it touts being above the law is for its lack of having a mastermind pulling the strings. For DarkMarket to be terminated, law enforcement would have to pinpoint an individual to reprimand.

With Silk Road, Ross Ulbricht was declared the owner of Silk Road, therefore he is to be indicted in court. However, with DarkMarket, police would have to arrest every individual user on the peer-to-peer site to close it for good. That seems highly unlikely.

As stated by Unsystem’s Amir Taaki, there was somewhat of an “arms race” to build the successor to Silk Road. Taaki, a DarkMarket developer stated:

“Like a hydra, those of us in the community that push for individual empowerment are in an arms race to equip the people with the tools needed for the next generation of digital black markets.”

Developers of DarkMarket claim a Rube Goldberg machine of checks and balances assures everyone on the site is playing fair with one another, as moderators oversee all transactions.

The site works just like Silk Road did, keeping user identities private. Contraband is shown in private pages with ratings linked to each user. The system ensures bitcoin payments are received only when goods are delivered.

DarkMarket’s developers claim the site is still in its early phase. Taaki claims:

“This is just a simple prototype, but we wanted to show people that it’s possible. But this is going to happen. If not us, someone else will do it.”

Will this just be another “challenge” for the officials to tackle? Only time will tell.