Bitcoin has been on a roller coaster ever since Mt Gox collapsed and rumors came out that the People’s Bank of China (PBOC) is looking to restrict Bitcoin. However, today, Bitcoin price increased by a good 10% amidst the comments made by PBOC’s governor Zhou Xiaochuan recently. Bitcoin’s price is over $460 as of now, per Bitstamp price quote.

The PBOC’s governor, Xiaochuan, commented on a Boao Forum that China has no plans to ban Bitcoin. A Boao Forum is a conference where people address and try to figure out economic solutions for Asia. Xiaochuan had said,

This statement by itself carries the much needed relief amidst rumors that PBOC was planning on banning Bitcoin. It reassures users, investors, companies, and speculators that Bitcoin will not be banned in China. Hence, Bitcoin price increased partly due to the news. Xiaochuan also suggested an approach for how to classify Bitcoin,

It could be that the PBOC is looking for ways on how to deal with Bitcoin and this is perhaps where rumors might have started.

Bitcoin on the Rise 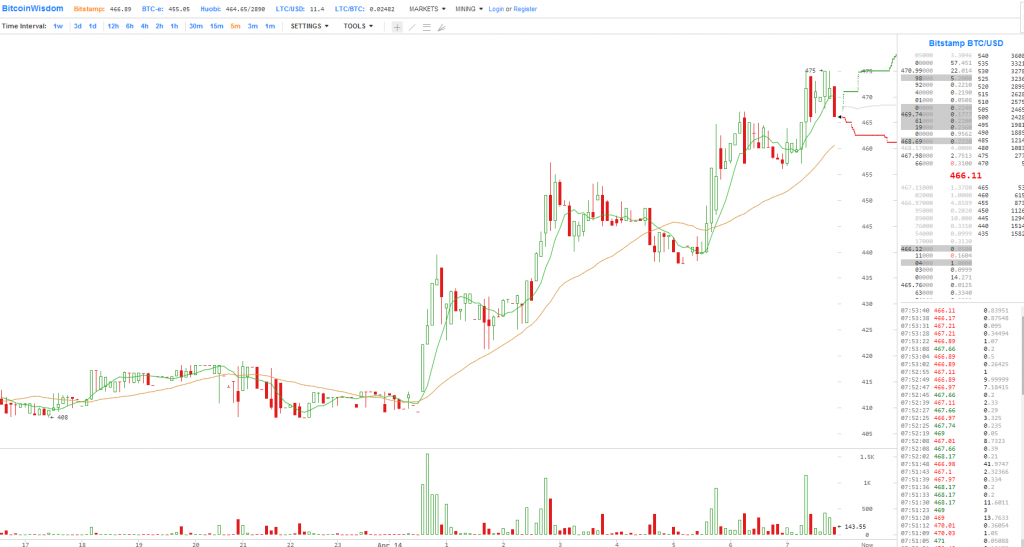 At this point PBOC’s governor has said that there are no plans to ban Bitcoin in China. As a result of this statement, Bitcoin price increased to over $460. It has been steadily increasing ever since Xiaochuan made the comment.

Another explanation to the rise could be that Chinese Bitcoin exchange OKCoin announced that it is working on making a Bitcoin ATM. In addition to this, in order to counter the PBOC’s bank deposit ban, OKCoin launched the recharge code scheme. This can possibly allow a loophole for escaping any future Yuan deposit ban.

Banks in China started to send notices to Chinese Bitcoin exchanges that said that their accounts had to be shut down. This had caused people to worry because it looked as if China was banning Bitcoin. However, this is not the case since the PBOC governor points out that Bitcoin is not banned in China.