Data and analytics company GlobalData said in a press release it sent to CoinReport that although most financial services experts agree that the blockchain technology that is behind crypto has certain value, chiefly from a security point of view, digital currencies are unlikely to replace fiat money.

The statement by the company is based on its premium “2018: Trends to Watch in Global Wealth Management” report published and made available to buy back in January. For reference, from December 1st 2017 to January 31st 2018, the highest price that the most widely used cryptocurrency bitcoin achieved was $19,343.04 (on Dec. 16, 2017) and the lowest the digital currency dipped to was $10,032 (on Jan. 30th 2018), as can be seen in the following graph from CoinDesk also: 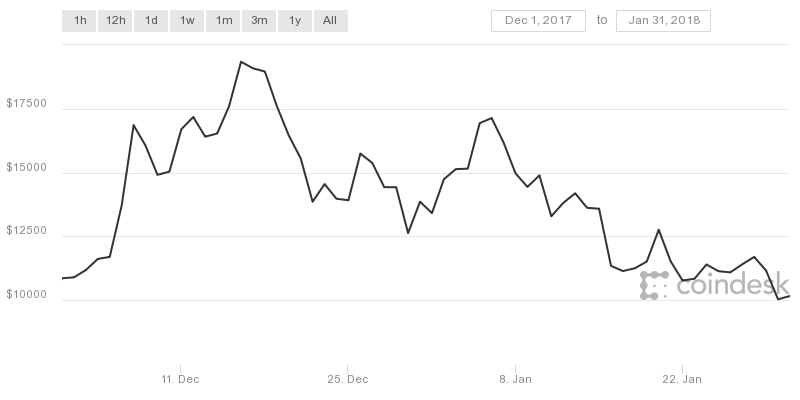 From an investment point of view, digital currencies attract both short- and long-term investors, said GlobalData, adding, a chief feature that brands cryptocurrencies as disruptors is their decentralization.

However, said the firm, decentralization gives birth to a myriad of issues, including stunted recovery from recession, lack of differentiated trade policies and potential for deflation.

The company agrees that should digital currencies replace fiat money, there are plenty of macroeconomic issues to consider. Realistically, they are expected to run alongside fiat currency.

GlobalData wealth management analyst Sergel Woldemichael added, “Globally around 2.2 billion individuals do not have access to traditional exchange systems, although they do have the Internet and mobile phones. The cryptocurrency ecosystem has opened a new avenue for these individuals with no business account or withdrawal software needed. Furthermore, the effects of counterfeit money and increasing inflation are avoided as this digital currency cannot be duplicated.”

Conversely, countries differ considerably in buying power parity, so the differences in consumer price indices would mean that the same value of digital currency would interpret to extremely dissimilar buying power between nations.

In some European Union nations, like Spain and Greece, which didn’t have the money to use expansionary monetary policy in their sluggish comebacks from the Great Recession, issues with the incapability to enact territory-specific fiscal police are apparent. Poorer nations, which usually pull foreign investors because of their lower labor expenses and natural resources, have the problem mostly related to themselves.

Although investors can potentially profit from digital currencies particularly due to the volatility of the market value, government is increasingly reluctant toward digital currencies because of significant technical limitations like the ability to scale up blockchain and the amount of machine power required to mine new bitcoins.

“Being a consistent and trustworthy store of value is a crucial property of currency, and the current volatility is not conducive to such trust. In the event of an uncertainty shock, people are likely inclined to rely on reserves – evidenced by the higher prices of gold during recessions. Cryptos fundamentally do not have such reserves. It is unlikely under current conditions that cryptocurrencies will replace fiat currency in the near future,” concludes Wagle.

GlobalData logo – Courtesy of the company