by Sinjin David Jung, Managing Director of IBMR.io and ARCC

In Southeast Asia, the social inequalities amongst the richest and the poorest are widening.  While the poor suffer, they also have to endure many hardships brought on by improper governance.  With Southeast Asia being one of the fastest growing economies, these economic inequalities are bound to lead to dissidence amongst the people.

A peaceful economic revolution of sorts could be the solution to finding equal ground between the drastically divided social structures, taking the power away from oligarchal conglomerates and giving it back to the people who they exploited to get there in the first place.

As history has shown, revolutions often lead to violence or the intervention of a military junta, which can strip away more human rights from the people than they began with.  Often times, measures that have been taken to fight corruption are led by corrupt individuals and are ineffective. Perhaps, with the advancement of technology, there may be new ways to combat corruption and reach a peaceful and inveterate revolution.

Social inequalities are widening in Southeast Asia despite it being one of the fastest growing economies. In Thailand, the top 1% controls 58% of the country’s wealth with the top 10 percent earning 35 times more than the bottom 10 percent. In Indonesia, the 4 richest men have more wealth than the poorest 100 million people with 50% of the nation’s wealth being controlled by the top 1%, and in Vietnam, the 210 richest men earn enough in a year to lift 3.2 million people out of poverty.

While Southeast Asia continues tackling high rates of crime, corruption and graft, poverty and infrastructure issues, there is an answer that lives on the blockchain. In the Philippines, Budget Secretary Benjamin Diokno laid out plans to leverage blockchain technology to improve their procurements services through transparency and anti-corruption, while blockchain IBMR.io’s (http://ibmr.io) ARCC (Asia Reserve Currency Coin) and their Social Proof-of-Work protocol enable the disenfranchised and impoverished to uplift themselves by utilizing a secured, and fully anonymous reporting mechanism to report instances of corruption and infrastructure problems.

While “blockchain technology will not solve all government problems, it can help curb corruption and instill trust in government.” We’ve already begun to see blockchain technologies step up to solve international crimes such as child trafficking, through the World Identity Network in conjunction with the UN Office for Project Services and UN Office of Information and Communications who launched a pilot that uses blockchain to help prevent child trafficking in Moldova. Additionally, the UN has started to advocate blockchain at relief camps for refugees to reduce pilfering of food and resources. Building Blocks helps the World Food Programme distribute cash-for-food aid to over 100,000 Syrian refugees.

As the world struggles with the ever-increasing tribalistic battles between the rich and poor and our social ethos dictates that we must do better to close these gaps, new technologies that live on the blockchain are providing a safe, effective, and empowering platform to combat critical barriers to equality. Revolutions often create scorched earth where those who are fighting for justice actually suffer once the despots are gone, because there is no better platform to immediately replace it, but blockchain is proving to be that light at the end of the tunnel. 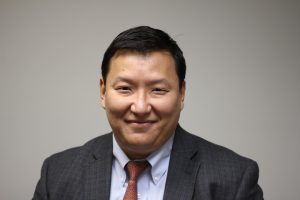 After extensive corporate and start-up experience in fintech, gaming, and infrastructure throughout East Asia and Southeast Asia, Sinjin founded the International Blockchain Monetary Reserve, the issuer of ARCC, for social impact and promoting financial inclusion through a decentralized economic system.

Sinjin as the former vice-chairman founded one of the leading fintech firms in the Philippines, True Money Philippines, licensed under the Central Bank of the Philippines (BSP) which is part of the largest fintech network in Southeast Asia, True Money. He has been a chief strategist and negotiator for over six years in Southeast Asia for infrastructure and gaming projects with a focus on regulation and operational set-up. He was the Regional Director of Asia for PokerStars, the world’s largest online poker game company and was the primary marketing and regulatory force for the game’s introduction across the whole of Asia. His professional background includes: being a former senior management consultant at PwC in Korea and a Korean government senior industry technology analyst. He has his MA in International Commerce from Korea University, focused on Social Justice during his studies in the M.Div program at the University of Toronto, and is a Harvard Kennedy School EE alumnus in the field of Economic Development.