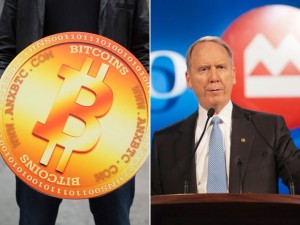 Bill Downe, the Chief Executive of the Bank of Montreal (BOM) said on April 1st that his bank would be receptive to dealing with bitcoin transactions on the condition that the digital currency becomes more regulated. This is the first major form of approval from any chief of a large Canadian bank.

Downe placed the conditions of the digital currency becoming more stable and regulated. He said in an interview after the bank’s yearly general meeting in Toronto that if those conditions were to actualize, “then there’s no reason why we couldn’t be an intermediary in bitcoin-related transactions.”

Bitcoin Has to Be Reliable: Bill Downe

“Because, if you wanted a Swiss franc transaction or a Japanese yen transaction or a U.S. dollar transaction, we can do that transaction for you…If bitcoin [can be] a reliable medium of exchange, then at that point in the future, we would be able to [conduct business] with bitcoin,” Downe stated.

Of the characteristics of bitcoin a transaction is that it does not require a third party to sign off on the transaction like a bank or a credit card company. For example, with credit cards, the issuer charges a fee of about 3% any time a credit card is used. This is charging extra money to the consumers only because they are using a card issued by a particular company. Because bitcoin transactions do not require the mediation of a third party, ultimately there are no extra fees being charge when it is used in transactions. That is a huge load off of the average person.

Bitcoin is a peer to peer based network system. The digital currency is a decentralized and is not controlled by any one government or central bank. The number of bitcoins in circulation is stringently controlled and only a specific amount will ever be issued. After this amount has been met, new bitcoins cannot just be created because a bank or a government wants to.

In the case of the United States, the financial institutions known as banks have either remained quite regarding the issue of bitcoins or severely spoken against it. With the charges of theft, fraud, money laundering, and other illegal activities rampant against bitcoin, the opposition has been running a smear campaign against the digital currency.

Mid- February, news came out about the Bank of Montreal shutting down the accounts of a Vancouver based bitcoin exchange. The bitcoin exchange stated that the bank is closing down all accounts owned by businesses that deal with digital currency.
It appears that a new page is being turned with this recent news of BOM becoming more open to bitcoin. But how open it really is only the future will tell.