‘We Are All Bitcoins’ Chinese Music Video Pays Homage to BTC

By : Ali Najjar
Comment: 0
Tag: Bitcoin Music Video, China, We are all Bitcoins 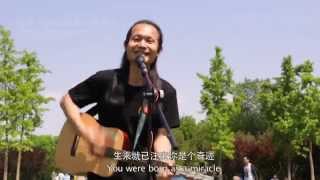 Bitcoin has inspired some of the most artistic people to voice out their expressions of not only the digital coin industry, but in the entire world as seen by them. One Chinese song writer, ZhangZhang, has composed the first ever bitcoin music video, paying homage to the the digital currency.

We Are All Bitcoins

ZhangZhang’s music video expresses his beliefs on how powerful bitcoin truly is for the world. The song is titled We are all Bitcoins, and glorifies how the coin’s birth has changed the world for the better. His music also offers historical knowledge of the coin, referencing the coin’s creator, Satoshi Nakamoto.

In ZhangZhang’s words, bitcoin tears down walls which restricts freedom of finance by governments. It brings hope to the people and eliminates injustices in the world. Some of his lyrics translated into English read:

“Your honesty repels all the doubts,
Your Transparency makes us believe in each other,

Your sunshine lights our future up,

You were born as a miracle.”

Bitcoin is credited by Zhang for making life brighter and unifying.

The song has received positive feedback from enthusiasts who share in the same beliefs as ZhangZhang. The bitcoin Reddit community has praised the song for its meaning and empowerment. His love for bitcoin resonates into how meaningful it is for individuals to have a secure monetary structure.

Though the song currently has under 400 views on YouTube, China’s YouKu video site has over 700. The song isn’t quite a viral hit, but does its part in spreading awareness for bitcoin, especially within the Chinese community.

The significance of the video is to show how meaningful bitcoin is to some, and that it can also impact others if they allow it in their lives as well.

Bitcoin’s exploration into the musical realm has just begun, and may one day influence more musicians to use and write about the digital currency. Perhaps in the future, rappers will be boasting about how many bitcoin’s they own, rather than dollars.