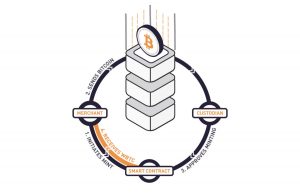 WBTC (Wrapped Bitcoin) will likely be introduced as a completely backed bitcoin ERC20 token on Ethereum in January 2019, according to a press release CoinReport received from Republic Protocol’s communications agency, BlockPR.

A community-focused enterprise, WBTC is the result of a continuing joint effort association between Republic Protocol, Kyber Network and BitGo.

WBTC will connect decentralized ecosystem on Ethereum with bitcoin liquidity, improving all decentralized apps. The initiative will enable the Ethereum network to be exploited to allow for new apps and use cases for bitcoin.

Well-known decentralized exchanges and financial projects, including Dharma, DDEX, MakerDAO, Hydro Protocol, IDEX, Set Protocol, Airswap and Prycto, have all confirmed that they will support WBTC’s adoption and will take part as launch members.

Kyber Network co-founder and CEO Loi Luu said in the news release we received, “This initiative will be bringing together the liquidity of Bitcoin and the extensive smart contract developer ecosystem of Ethereum. Applications on Ethereum such as decentralized exchanges and financial protocols will all be able to use Bitcoin seamlessly, creating bitcoin trading pairs which have been impossible until now. At the same time, the usage of Bitcoin will be expanded by having more decentralized use cases, such as exchange, loans, token payments.”

Leading institutional-grade digital currency security firm BitGo will serve as the custodian at launch. Transparency is the most significant feature of this enterprise: all WBTC issued will be completely backed and verifiable on-chain.

In order to uphold the superior standards of transparency, the initiative dashboard will include proof-of-reserve showing that each bitcoin stored by the custodian matches the total outstanding WBTC. With approval from the merchants, minting will only be possible via the custodian, and WBTC will be burned when the token holders redeem their tokens for bitcoin. All these activities are confirmable on both blockchains, something only available with digital currency.

Any project will be able to add WBTC to their platform without limitations, whereas users will be able to easily buy the tokens on all supported exchanges or swap services. Right from the launch, the initiative will be community-driven, with governance dictated via a Decentralized Autonomous Organization (DAO) that is composed of trustworthy projects in the digital currency space.

In order to ensure the correspondence between the balances in the smart contract and the custodian wallet, DAO members will publicly audit the WBTC tokens. Moreover, they’ll vote and arrive at a conclusion whenever any improvement is proposed. The removal of any members and addition of any new DAO members, custodians and minters will take place through a transparent voting process in the DAO.

The initial minters and DAO are expected to go live along with the enterprise in January next year. Ahead of the launch, the specifications will be made public on Gitter/GitHub for all digital currency community members to deliberate and suggest enhancements on both the governance model and the token.

To offer initial liquidity and make WBTC available for atomic swaps with users, Republic Protocol and Kyber Network will, at launch, re-mint WBTC tokens from their own bitcoin inventory.

Republic Protocol CEO Taiyang Zhang stated, “The addition of atomic swap technology to the WBTC initiative will allow users to deposit and withdraw BTC/WBTC securely and with confidence, which will assist in enabling WBTC adoption to reach the masses.”

In addition to being the initial regulated custodian, BitGo will support WBTC in its enterprise wallet, like any dapp, payment or exchange services utilizing Kyber.

Although the initial focus of the initiative is on bitcoin, the same strategy can be used to bring other major digital currencies to Ethereum.

BitGo CTO Benedict Chan said, “We are really excited to tokenize the most widely accepted cryptocurrency on Ethereum. I think this is a great application of the flexibility and power of blockchains, and it’ll drive greater interoperability and utility throughout the entire ecosystem.”