Bitcoin, along with all other forms of digital currency have been proclaimed unusable in Russia. This was concluded by the Russian Prosecutor General Office after a meeting with the Central Bank, Federal Security Service, and the Ministry of the Interior of the Russian Federation.

The Prosecutor General Office accuses that the interest in bitcoin by users is because of its ability to allow for money laundering and profiting through illegal means. The office goes to to say:

“Russia’s official currency is the ruble. The introduction of other types of currencies and the issue of money surrogates are banned.”

This disables corporations and citizens from continuing business with virtual currency. The meeting even called for recommendations on how to prevent the uses of digital coins.

A month ago, the Central Bank issued a warning against the risk of using bitcoin, tying its use to stereotypical negative impacts society has been told about. The bank stated under Article 27 of the federal law, the currency is illegal.

Bitcoin‘s independence and anonymity worries the bank of Russia, making them expect criminal activity to grow in mass volumes. 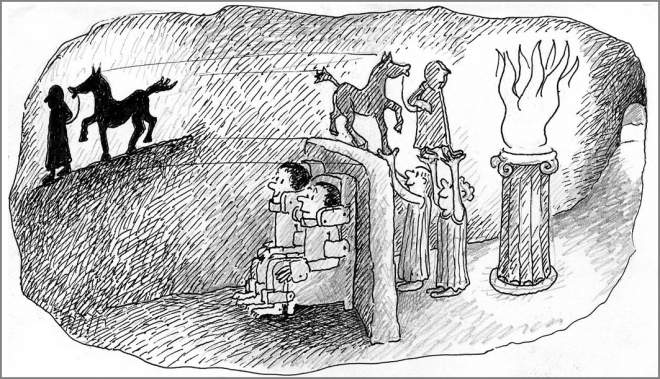 Allegory of the Cave

In addition to Russia’s recent refutes towards bitcoin, China and Denmark have already done away with bitcoin deposits. Due to potential risks, it would seem as if each country is willing to give up on digital coins altogether.

However, if countries gave up on every new idea, invention or technology due to potential risks, then the world would be a very bland place.

The refusal to experiment with the benefactors of digital currencies, and deem it useless due to fear is reminiscent of Plato’s Allegory of the Cave.

Those who do not try and fully understand bitcoin in order to regulate it, want to remain safe within their cave walls. Those who want to see bitcoin flourish, or at least understand it better, are the one’s who bravely stepped out of the cave to learn where the shadowy figures come from. In this case, bitcoin is the unknown that needs to be further examined, and not ruled out due to what ifs.