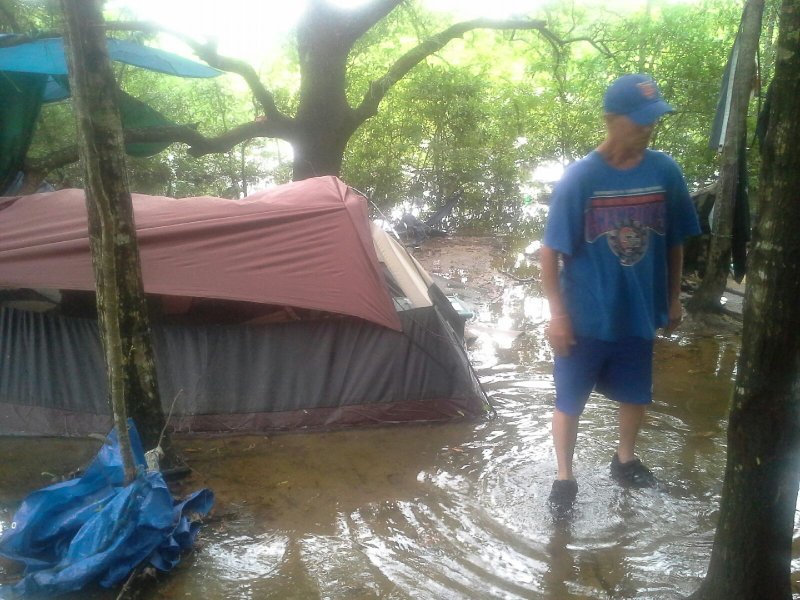 Man takes in the devastation around him.

Sean’s Outpost, a homeless outreach center, has been affected by a mass flood. The Pensacola, Florida center rises to the occasion to help bring an end to poverty, however, the flood has caused a setback in those plans.

In the heart of Satoshi’s forest, the homeless outreach center run by Jason King was hit with heavy rain, causing the center’s headquarters to suffer. Many people within the area have been displaced, as homes are not safe to live in.

The facility is in desperate need of our help, and is welcoming bitcoin donations to ease the community’s pain.

Sean’s Outpost began welcoming bitcoins back in March 2013, and has served more than 30,000 meals to the needy in that year alone. In addition, Jason King was able to make a mortgage down payment with the use of bitcoin’s for the forest area.

Now the digital currency is needed to help restore the site, and give citizens of Satoshi Forest a helping hand in the mean time.

Donations will be used to buy food and supplies, and can be made in both bitcoin and litecoin. All other types of donations are welcomed as well.

To donate to Sean’s Outpost in bitcoin, please use the following digital address: 1M72Sfpbz1BPpXFHz9m3CdqATR44Jvaydd.

Litecoin donations can be made here: LafvNZYtuEQXkNamyDyRUwzLhPgpSF2PPa.

“Heavy rain doesn’t quite cover it. 26 inches in 24 hours. This was a millennia event. Pensacola is in real trouble. There are only 3 emergency shelters in operation. One of them is being run by us. Most emergency services were destroyed or seriously reduced by the floodwater. It is really bad. I am extremely proud of everyone at Sean’s Outpost Pensacola for stepping up in this time of need. You guys rock.”

King and his team’s positive outlook and patience will help them get through this difficult time.