Joe Manchin Turns Over A New Leaf About Bitcoin

A month after American Senator Joe Manchin called Bitcoin “disruptive to our economy,” the senator has turned over a new leaf. 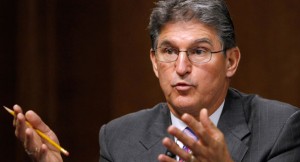 In an interview with the Washington Post, Manchin said that the recent efforts made by the IRS to tax Bitcoin and moves made by government officials and entrepreneurs, have stemmed his faith about Bitcoin. Manchin believes that the government will be able to “get more of a handle” on the virtual currency. He said,

“Sure, it makes us look at it differently. It sure will. When I said what I said, it was because it was totally unencumbered. The whole thing lent itself to a lot of improprieties — especially in the underworld, if you will, whether it be drugs or arms. Those were the things I was concerned about.”

Manchin Backpedals on his Previous Claim

In February, Joe Manchin, who is a member of the Senate banking committee, wrote a letter regarding Bitcoin to the Federal Reserve Chairman Janet Yellen and the Secretary of Treasury Jack Lew. In the letter, Manchin called Bitcoin “highly unstable.”

In addition, he pointed out that there were restrictions against Bitcoin in places like China, Thailand, and South Korea. In an effort to ban the use of Bitcoin, Manchin urged the officials to,

The Federal Reserve Chairman, Janet Yellen, immediately responded the next day by explaining that the Feds did not have any authority to regulate different currencies. Adding on to this, the IRS recently called Bitcoin a property and not a currency. Due to this, the IRS issued new taxes for Bitcoin which means that Americans will have to report Bitcoin on their tax returns.

On Wednesday, Manchin said that due to the incorporation of Bitcoin into the financial and regulatory system of the U.S, it has caused him to have a new stance on the digital currency. However, he is still a bit skeptical, according to the Washington Post. Manchin said,

“There still has to be transparency and a reserve base. There has to be something that’s tangible. If the feds can’t get their hands around it to where they can secure it, then I would be very leery of investing in it or trading with it or buying with it.”

It appears that Joe Manchin has jumped to the other side of the Bitcoin spectrum: from hating it to hesitantly accepting it. However, it seems that this move was done only because the United States is more open to dealing with the virtual currency now. The sincerity of this decision will only be known if Bitcoin goes through any more hurdles. The real believers of Bitcoin will stay by the currency, while those who only liked the currency because of alternative motives will be quick to judge and go against it.