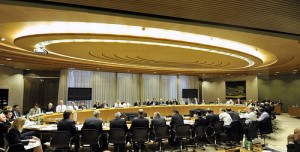 Regulators around the world are moving closer to regulating the financial technology sector, which includes blockchain technology, to make sure the sector’s rapid growth does not present risks to the financial system, reports Reuters.

The Financial Stability Board (FSB), which convened in Tokyo on Thursday, has agreed on a framework for categorizing various components of financial technology and assessing their possible risks.

Composed of central bankers, regulators and finance ministry officials from the Group of 20 economies, the FSB is examining financial technology partly in response to uncertainty over whether it will “disrupt” traditional banking, said Reuters.

In a news conference broadcast from Tokyo, FSB Chairman and Bank of Canada Governor Mark Carney said the board did not have fundamental concerns about financial technology and members wanted to explore opportunities to apply it.

“The important thing for us as members of the FSB is to be moving in parallel with these developments and not be stifling innovation, but being able to apply them in a way that improves the resilience of the system,” said Carney.

As reported by Reuters, Carney said policy intervention by other authorities in areas such as competition, consumer protection and conduct would need to come before any financial stability considerations.

Carney said there was a possibility of freeing up some capital requirements for institutions because settlement would be in real time rather than delayed. “That has to be weighed against potential operational risk.”