Sunrise, Florida-based decentralized logistics platform provider dexFreight announced in a press release CoinReport received from The Launchpad Agency, dexFreight’s PR company, its partnership with the port community of Veracruz, Mexico, to perform proof of concept project for a blockchain/distributed ledger technology (DLT)-driven port community system. In addition to dexFreight, the partnership will be led by the Texas A&M Transportation Institute (TTI).

It will be the first partnership of its kind in the Americas and will assist in defining DLT applications for enhancing the efficiency and security of freight transportation within the port system. Moreover, it will identify ways to streamline the current processes that involve container export.

For the project, dexFreight will be developing an internet-based application for stakeholders, which include the Port Authority of Veracruz, Hutchinson Ports (ICAVE), the Customs Brokers Association and the Mexican Customs Agency) to manifest data and other legal documents, and record export process events to smart contracts.

The application will then be tested by stakeholders for several months to quantify advantages in relation to minimizing the hours needed to complete the process for container export, evaluating how DLT is able to add transparency and accountability among the involved stakeholders.

The new enterprise, if successful, will implement DLT in the future creation of a port community system and link to several outside partners like software vendors, banks, insurance for the service of the community. 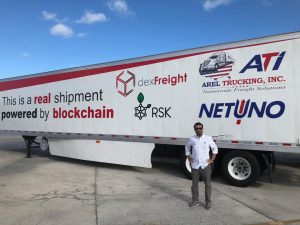 dexFreight co-founder and CEO Rajat Rajbhandari said in the news release we received, “The Port of Veracruz is the third largest port in Mexico, so we are thrilled to play a role in this important project. This an incredible opportunity to test the application of blockchain technology in a port environment and set a precedent for similar projects in ports around the world.”

Last year, the Port of Veracruz moved 1.12 million TEUs, becoming Mexico’s third busiest container port and the Gulf of Mexico’s most important. At present, it is going through an increase of its capacity and projects the trend of increasing container volumes to continue with up to five million TEUs by 2030. Because of this reason, the project’s participants are certain the infrastructure’s modernization has to go together with the utilization of latest and improved information technologies to drive more efficient logistic services via the port – thought of as by some Mexican officials to be the country’s largest infrastructure investment in a century.

Veracruz Customs Agency administrator Baruc de la Fuente explained, “The project and the PCS are critical in improving trade efficiency at the port and being competitive. The aim of the PCS is to reduce the time and effort it takes to securely export and import containers through the port and provide much better service to the private sector customers.”

Susana Diaz Virgen, general manager of Hutchinson Ports ICAVE, one of the two terminal operators at the port, said that the purpose of the initiative is to minimize the time needed between receiving appointment from customs brokers to actually loading containers and other cargo to a ship by streamlining the complete process and utilize DLT to offer accountability among agencies in the process.

“The port’s competitiveness is imperative for its long-term success. The community must come together to find innovative technologies, such as blockchain, to enhance the port operation for the benefit of importers and exporters,” Veracruz Customs Brokers Association president Ramon Gomez Barquin asserted during the initiative kick off meeting in Veracruz.

Images courtesy of dexFreight via The LaunchPad Agency