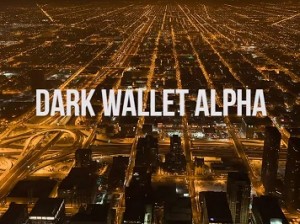 Dark Wallet will be used to not only disguise transactions, but has been aimed at the bitcoin community, with cooperation for regulations in mind.

Over $50,000 in funds for the project were raised on Indigogo, and it was created by a group called unSystem. Dark Wallet fits in perfectly with bitcoin’s DNA, as it conceals the identity of whoever is making and accepting  bitcoin transactions.

Back in January, CEO of Circle Internet Financial Jeremy Allaire, said that bitcoin was evolving from its roots, while continuing to avoid regulators and playing to criminals.

“If your goals are to create a sort of shadow financial system that runs in offshore jurisdictions and is attractive for anarchists and criminals, then maybe [regulation] is not important.”

However, Wilson feels differently. As Allaire states that such a tool is exluded from the mainstream, Wilson feels such a technology should only be made to work for a select group. He said:

“If you have a large division of the world’s population using bitcoin it certainly bodes well for the price […] but I think it bodes better for the technology as a marginal currency, a currency of ‘the other’.”

Wilson and Taaki feel that such tools as the Dark Wallet and black market site DarkMarket are supposed to go against the grain. Though DarkMarket’s name was changed to OpenBazaar, after a Reddit petition proved effective, to make the use of bitcoin more appealing, Taaki stated:

“People need to stop being afraid and reclaim these words of power used to control us. The Dark name evokes great imagery and sounds cool. It’s like when they used to call us pirates to shame us and the pirate party stood up and said, ‘Yeah! we are pirates!”

By keeping bitcoin in the ‘dark’, Wilson and Taaki want to bring bitcoin back to its roots as a crypto currency for the underground but more importantly, anonymous.