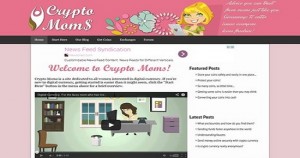 A survey conducted in April 2014 showed that there is a huge disparity between the male and female involvement in the digital currency network.

It is a known fact that the digital currency world is currently dominated by men. The surveys showed that the male and female ratio is 19:1. This means that there are 95% males involved in the digital currency phenomenon and only 5% females. Women’s advocates have become concerned over this gender difference and are voicing their opinions on the matter. It is being discussed in different bitcoin forums to bring light to the issue. At the same time, there has been a shortage in dedicate efforts targeted at rectifying this realization… until now.

Cryptomoms.com has officially launched on Wednesday, April 16 in the United States’ Midwest. It is developed and completely funded by the same team of people who created DNotes. The website and effort was launched as a way to close the gender gap that is visible in the digital currency world.

According to Cryptomoms’ official statement, the aim of the website is to

“encourage and assist women to participate in the emerging world of cryptocurrency overwhelmingly dominated by men.”

The makers of the website want to create a “culture” where women can gain basic knowledge about the digital currency and learn how they too can profit from this phenomenon. To gain awareness, publicity and a way to reach out to the female population, the place is to conduct campaigns and initiate “outreach projects.” Peers in the industry and other advocates will be asked to join in the effort to reach out to the female population.

“We will set very specific quantifiable goals and sponsor creditable surveys to measure our achievement against those goals. For the common good of our industry we are committed to make a difference.”

Cryptomoms’ forum is already alive with bursting enthusiasm and excitement. The overall vibe of the website reflects openness to everyone and a sense of welcoming for new members. Even though both men and women are welcome on the website, there is a sense of female dominance because the website is directed towards females.

The official launch of Cryptomoms will start with a great giveaway of up to 3 million DNotes. Those who register and participate in the forum will automatically be sent 250 DNotes to their wallet addresses. Cryptomoms support team will be ready to help those who are new to the digital currency world and explain to them the ins and outs of the market.

The Cryptomoms website is already fully functional and has put up instructions and tutorial videos explaining the digital currencies. It is recommended for beginners to open an account with an exchange where DNotes is listed and accepted. These include Allcoin and Poloniex.

For the digital currency to become completely mainstream the great gender gap has to be corrected because women control more than 50% of the consumer purchasing power, related a spokesperson from DNotes.

Texas Attorney General Accepts Bitcoin for His Run for Governor