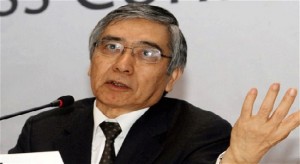 BOJ Chief Says Bitcoin is Not a Currency Unless it Stabilizes

Tokyo (AFP) – The Bank of Japan(BOJ) Chief, Haruhiko Kuroda, shared his opinion on Bitcoin’s future. Kurodo does not believe Bitcoin will have a successful future unless it proves to be reliable.

On his viewpoint of Bitcoin, Kurodo said,

“It is not a currency, and I don’t think it is a general means of settlement.”

The reason behind his opinion is because the BOJ Chief believes that,

“Without safety or stability in its value, there would be no demand. In that sense, it cannot be a currency.”

Bitcoin, unlike regular currencies, is not backed by any government or central bank. This is one of the main reasons as to why Bitcoin is so controversial. Within Bitcoin’s protocol, there is no authority figure involved. In actuality, it is the Bitcoin users who run the economy of the digital currency.

The BOJ Chief’s opinion could have stemmed from the Tokyo-based Mt Gox debacle. In fact, due to the Mt Gox scandal, people have been skeptical of the digital currency’s worth. This is because when the digital currency exchange fell, Bitcoin’s value fell with it for a while.

In a rollercoaster ride, Mt Gox initially halted withdrawals citing a “technical glitch” which it later blamed on the Bitcoin network. The ex-digital currency exchange went on to explain that it had gotten hacked due to a DDoS attack which was an apparent risk of the Bitcoin network itself. At the end of the ride, Mt Gox declared bankruptcy protection citing that it had lost a total of 850,000 bitcoins.

However, it didn’t end there. After investigation, 200,000 bitcoins were found from a forgotten Mt Gox wallet. This means that Mt Gox lost 650,000 bitcoins in reality. Continuing with this, an extensive research into the matter revealed that Mt Gox actually only lost 386 bitcoins due to the malleability attacks. At this point it is hard to determine what the total truth of the situation is.

The reason why the BOJ Chief is distrusting Bitcoin is most probably due to Mt Gox’s fall and also because Bitcoin’s price has been volatile due to rumors of a potential Bitcoin ban in China.