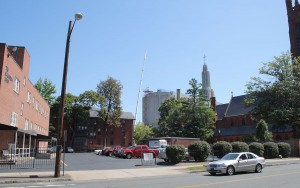 The Asylum Avenue District, a historic district in Hartford, Connecticut, viewed from Sigourney Street (2009). Tierion is located at 555 Asylum Ave – #307.

On April 29, blockchain startup Tierion announced it has raised $1 million in a seed round led by Blockchain Capital and Fenbushi Capital, with participation from Digital Currency Group.

Tierion is using blockchain technology to create a global platform to verify the integrity of any data, file or business process. The Hartford, CT.-based company provides developers with an API and tools for creating apps that connect to the blockchain.

The company said in a press release that it uses a scalable engine for cryptographically connecting data to the blockchain and producing blockchain receipts. This process, known as anchoring, enables millions of records to be linked to a sole transaction on the blockchain. Receipts can be shared with other systems and used to independently confirm the integrity and authenticity of any file, data or business process.

“We’re thrilled with the creative uses we’ve seen for Tierion,” said Wayne Vaughan, Tierion’s CEO, in the press release. “At one end of the spectrum, one of the world’s largest healthcare companies is using Tierion to record the maintenance and usage history of industrial medical equipment. At the other end, we’re seeing a legal cannabis dispensary use Tierion to create immutable records of their inventory and transactions.”

The startup and its partners have created an open specification called Chainpoint for anchoring data to the blockchain, said the release. Developers can use Tierion to create simple applications that notarize documents or more advanced ones that automate business processes and create an audit trail that is verifiable using the blockchain.

Vitalik Buterin, Ethereum founder and partner at Fenbushi Capital, said in the press release, “Tierion makes it easy for developers to integrate proof-of-existence and immutable records into existing applications. It’s an interesting approach that demonstrates the advantages of anchoring data to the blockchain instead of storing data on the blockchain.”

Digital Currency Group CEO Barry Silbert said, “We are excited to see the Tierion team leveraging the core innovation of blockchain technology to secure data and ensure it cannot be tampered with. Their open protocol will enable those new to this technology to easily create data management tools to track the history of one of the most valuable assets of any organization – information.”