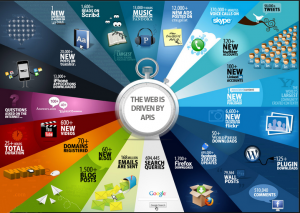 Application Programming Interfaces (APIs) are, in many ways, the backbone of the modern internet. APIs are simple interfaces for allowing programmers to write code that talks to various services and applications and extracts useful information from them. However, the modern world has such a plethora of APIs complying to different standards and documented in different places that it can be challenging for developers making large applications to find and use the APIs they need.

API Network (www.apinetwork.co) is looking to fix that. The network launched a crowdfunding initiative using the Master protocol (a cryptocurrency-based crowdfunding platform similar to CoinPowers) on June 18th. The goal is to construct a decentralized API platform and marketplace that will provide a unified interface for querying APIs from a variety of platforms, including Facebook and Twitter. The service is called the Plug n Play network, and you can see the list of currently supported protocols at www.apinetwork.atlassian.net/wiki/display/ANW/List+of+APIs.

The money raised via their crowdfunding campaign will be used to purchase closed-source code in order to open it up and to pay developer salaries.

Now, the platform is expanding to offer support for the Kozen API, a meta-API designed to allow buy and sell interactions with a variety of cryptocurrencies — both those that work using the Bitcoin blockchain, and those that keep their own, separate blockchain. This is useful, as it may enable an entire suite of Bitcoin-enabled e-commerce apps that integrate effortlessly with other services via the Plug n Play network, potentially providing a widely expanded role for Bitcoin in the web economy of the future.

You can support the crowdfunding campaign and learn more at www.buyxap.com.