It’s easy to write Dogecoin off as a joke, largely because (in a lot of ways) it is. Dogecoin is a weird little altcoin without much to recommend it technically that has somehow found itself a lasting position in the top ten cryptocurrencies, long after the meme behind it has become so passe and irrelevant that the government is using it to promote Obamacare. 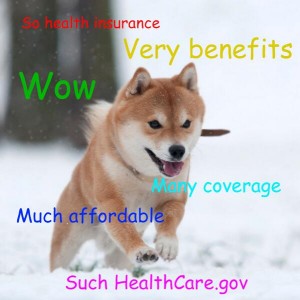 When something that confusing happens, it’s worthwhile to take a moment and figure out which of your fundamental assumptions are wrong. What exactly does Dogecoin have going for it that gives it any kind of value? It’s definitely not because the currency is innovative, or going anywhere technologically: There is no plausible future in which Dogecoin is a serious, legitimate means of payment for the general population. What Dogecoin does have, though, is something that the Bitcoin community can learn from: its community.

Take the subreddits as an example. The Dogecoin and Bitcoin subreddits have similar numbers of subscribers (87,035 and 134,040 respectively at time of writing), but the moods of the subreddits are very, very different. To quantify that, here are word clouds generated from both subreddits, with the name of the currency (“Bitcoin,” “Dogecoin,” and “Doge”) removed to open up space.

Then there’s the tipping. Look at all that tipping. The most used word on the Dogecoin subreddit after “Dogecoin” and “Doge” is “Dogetipbot.” Dogecoin users tip an absurd amount, and they do it for everything. My colleague here at CoinReport, Ben Isgur, thinks that Dogecoin has meaningful value as social currency: a finite amount of whuffie you can distribute to those you think are doing good works, and I don’t think he’s wrong. Dogecoin may well have a lasting role as a kind of scarcity-based karma for social media sites.

Beyond the tone and the tipping, though, differences remain. Dogecoin engages in community projects like buying a Nascar sponsorship and donating to charity, in a way that Bitcoin really doesn’t. Dogecoin users seem to be having fun. Perhaps more importantly, though, Dogecoin has less of the shrill, shiny-faced hype that mars the Bitcoin community. Both communities have their fair share of get-rich-quick day traders relentlessly try to suppress bad news and encourage others to buy in an effort to turn a profit – but, in the case of Dogecoin, at least most of the community is aware that all the “to the moon talk” is a joke. The fundamental absurdity of trying to make money off of a Shiba Inu meme helps to keep that kind of nonsense under control.

The same goes for the politics: Cryptocurrencies are going to change the world someday, but right now, the people who are really into it for political reasons tend to be aggressive, fringe anarchist folks who can be really offputting to newbies. Dogecoin is so silly that the same kind of attitude is hard to sustain. It’s difficult to get too frothy about the Federal Reserve when your ideological platform mostly runs on comic sans and bad grammar.

Again, the fundamental absurdity of Dogecoin helps to buffer it against its own worst nature – and that’s powerful. If you want to get into cryptocurrencies, who are you going to go with? The red-faced anarchists and sweaty, desperate day-traders, or the friendly dog people who give you money for being cool?

Part of bringing Bitcoin into the mainstream is bringing the mainstream into Bitcoin: putting on a public face that won’t scare your grandmother and is approachable and friendly and not completely crazy. When people see “Bitcoin” as a payment option at a cash register someday, their first thought shouldn’t be “Oh look, it’s the thing the news says that drug dealers use” – it should be “Hey, I posted a recipe on Pinterest the other week, and someone gave me some of that!”

It’s completely doable. You probably won’t even have to use comic sans.