Yeah, Dogecoin. Funny that the second coin I talk about in this series would be what most consider the least sane of the coins. After all, clearly Dogecoin is never going to amount to anything. At least, that’s what they all say. How could something that began as a joke — a riff on a meme that is on its way to dead — end up as money?

If this is how you think, you’re not alone, but I’d argue you’re wrong.

As before, though, step 1: How does it work. Coin specs:

There’s something interesting in there, something that in my mind separates Dogecoin from nearly all other cryptocurrencies on the market. As you likely know, Bitcoin, Litecoin, and most other coins are deflationary. Their owners are fairly strongly incentivized to hold onto them as long as possible before spending them.

That’s not the case for Dogecoin. After the initial distribution, it remains perpetually inflationary. I’ve written in fairly extensive form about what this means for Dogecoin in the past, where I first included this chart I’m reusing to make a point: 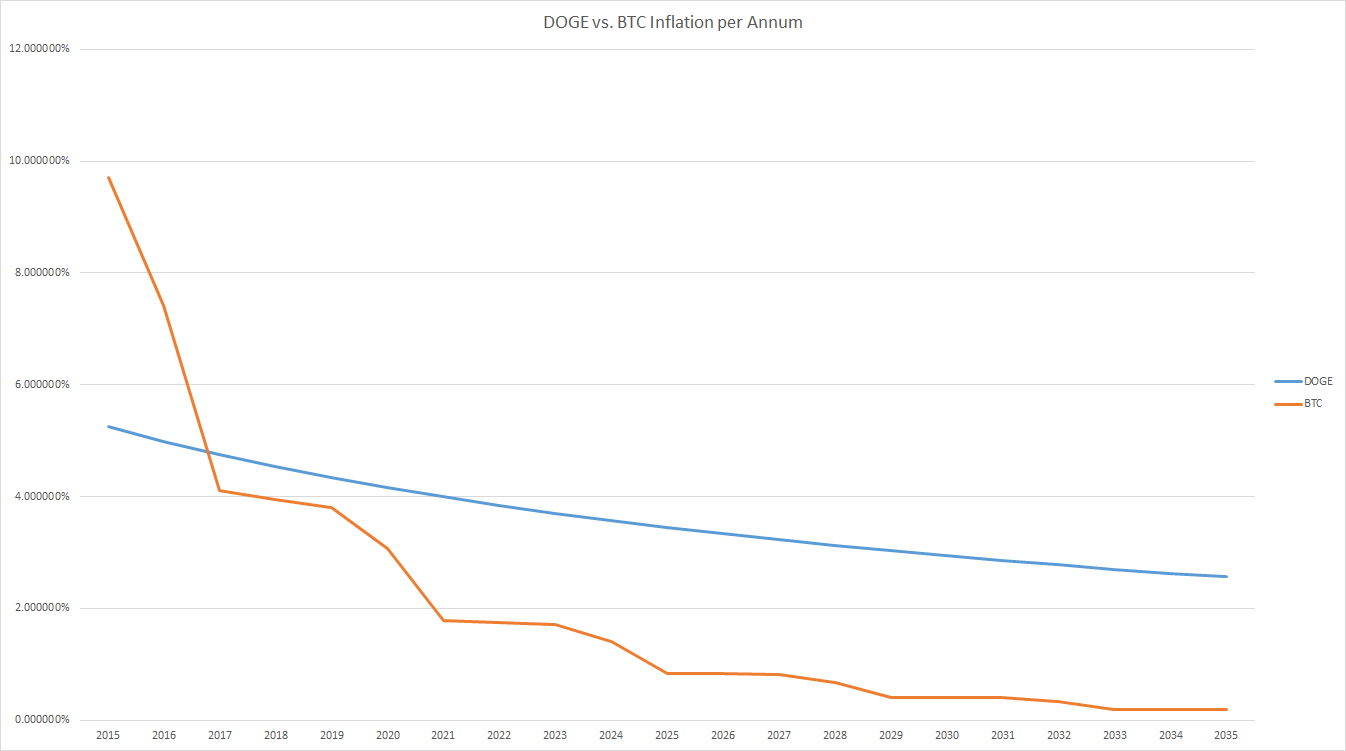 To summarize the points made before:

WHY does Dogecoin deserve to have value? I would cite two reasons.

Number one, above all others, is that Dogecoin is uniquely suited among the most popular coins for microtransactions. Why? First, short block time — 60 seconds means you can do 1-confirmation transactions (which, though not perfectly secure, are good enough when working in very small amounts) while not being too inconvenient for frequent use. Bitcoin has issues doing this, unless you want to use 0-confirmation transactions, 10 minutes can seem excessive. Other coins are as fast or faster, though.

The second reason? That one is a little convoluted, and some might even say contradictory. In my view, the other major reason why Dogecoin has value as money is because people don’t treat it like money.

They give it away.

Other times the value is more significant. Oh, that person’s account has 10,000 karma? Well, clearly their opinion is successful; it’s likely their views are thoroughly considered. Wow, that person was tipped 10,000 Doge for this? What a significant effort to show approval — there must really be something to whatever approval is being shown of.

The difference between Dogecoin and likes, favorites, karma? You aren’t limited to a single instance. You can display the magnitude of your like. THAT is why Dogecoin has value as karmic currency — by creating a method to express like-magnitude.

Dogecoin has use and value as a currency because it’s easy to spend — or to give. But as a network, I think it has a solid place as a simple, cross-platform method of tipping one’s hat; wagging the tail of another. Perhaps the true floor valuation of Dogecoin will be the amount of money we’re willing to invest in karma to give to others. Not to say that that is not a tricky answer to discover, but it’s nowhere near as tricky as the question of where the value actually ends up. To know that, we have to know something about the people being tipped.

Will they cash out their Doge? Or will they re-spend them — not as merchants, but as karma.

Will they join the cycle of the karmic economy, or return their karma to the pool to rejoin the fiat economy?