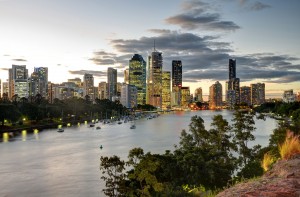 As Bitcoin grows in popularity, so does the demand for easy access to it. The first Bitcoin ATM in Brisbane, a city in Australia, has just launched today. The ATM will allow customers to withdraw cash from their online Bitcoin wallet or buy bitcoins.

Bit2Bit is the company who has rolled out the Bitcoin ATM at The Roastery Café in South Brisbane. In addition to having a Bitcoin ATM installed on its premises, the café also accepts Bitcoin as payment.

Customers will be able to register for an online Bitcoin wallet through the Bitcoin ATM. With the wallet, they can then add bitcoins to it or sell some bitcoins. Bruce Carrall, the co-owner of Rouge Coffee said,

“We’ve seen a surge of interest from the mainstream population wanting to be involved in the Bitcoin movement.”

“The currency has grown more than 1000 per cent each year for the past four years, and people are also starting to use it as an investment.”

Last month, a Bitcoin ATM was installed in Westfield Sydney by Australian Bitcoin ATMs (ABA), a company that distributes, operates, and imports Bitcoin ATMs in Australia. It said on the ABA website,

“Bitcoin ATMs remove the indimidating and difficult aspects of buying and selling bitcoins. With an intuitive, straight-forward interface and the convenience of immediate liquidity, Bitcoin ATMs attract both first time users with almost no knowledge of the cryptocurrency and its seasoned traders.”

Like the Brisbane ATM, the Sydney Bitcoin ATM allows users to withdraw fiat currency and buy bitcoins. With Bitcoin ATMs, people will be able to gain access to the digital currency on the go. In fact, there is a global impact of Bitcoin ATMs in that people around the world are given the ability to interact with Bitcoin in an easy and convenient manner.

Pay in Bitcoin with a Head Nod Using Google Glass