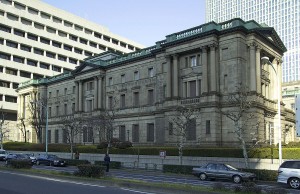 The Bank of Japan headquarters in Tokyo, Japan

The Bank of Japan has its eyes on the technology underpinning bitcoin and other digital currencies.

In recent remarks at the Conference on Retail Payments, reported EconoTimes, Bank of Japan Deputy Governor Hiroshi Nakaso said conventional financial infrastructure is built around “centralized ledgers,” while blockchain and distributed ledgers “are considered as enabling to keep ledgers in a de-centralized manner without relying on a trusted third parties [sic] to manage ledgers.”

Nakaso said, “Owing to such characteristics, blockchain and distributed ledger[s] have attracted considerable attention since international forums are focusing on their potential to be applied to wide-ranging businesses and practices. The application of those technologies would also change the structure of the financial infrastructure that has been built around centralized ledgers managed by trusted third parties. Thus, central banks will and have to follow these issues closely and with great interest.”

Nakaso said the central bank “does not have a specific plan to issue digital currencies at this stage,” unlike other jurisdictions who are mulling the possibility, “but will deepen its research and analytical activities so as to understand the impact of technological innovations, FinTech and distributed ledger on financial architectures and FMIs [financial market infrastructure] while keeping all options open, including the possibility of the Bank’s utilizing such advanced technologies in its own operations in [the] future.”