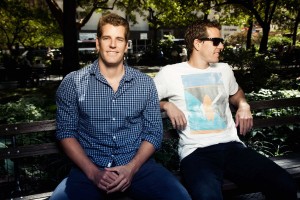 Tyler and Cameron Winklevoss discovered bitcoin in June 2012 while on vacation, and have had big plans for the digital currency ever since. The duo claims that bitcoin encourages financial freedom and openness.

Their destiny’s lead them to bitcoin while in Ibiza, after bumping into a familiar face. Tyler explains:

“We were on vacation, and happened to bump into a guy who is mutual friend and he started to tell us about bitcoin. We were fascinated from day one. At the time we were just re-immersing ourselves inside the tech world, getting into the trenches again.”

The twins introduction to bitcoin occurred soon after legal battles against Facebook founder Mark Zuckerberg. The brothers won $65 million in a settlement, after Zuckerberg was accused of stealing their social media idea.

With all that behind him now, Tyler believes bitcoin is the next big mainstream focus, and that it has the potential to be even bigger than Facebook. He says:

“Bitcoin potentially could be more impactful because being able to donate 50 cents to someone across the world has more impact than potentially sharing a picture. But they’re very different. Facebook is like the internet – a large company and an application. Bitcoin is a protocol for decentralization, so you could build a decentralized company on top of it, a stock market. It’s an internet of ownership, so it’s not quite a direct comparison.”

As the 32-year-old investor mentions, bitcoin and Facebook are two completely different mediums, however, both work on bringing people to interact with one another through peer-to-peer networking.

The brothers remain optimistic that the rest of the world, including Wall Street, will take notice and implement the digital currency. Tyler compares the doubters of the internet from the early 1990s, to doubters of bitcoin today. Though the concept is new and some minor bugs need to be worked out, time will show how resourceful bitcoin will be.

Both men hope to secure bitcoin on the Nasdaq stock exchange, which would build a stronger reputation for the digital currency.