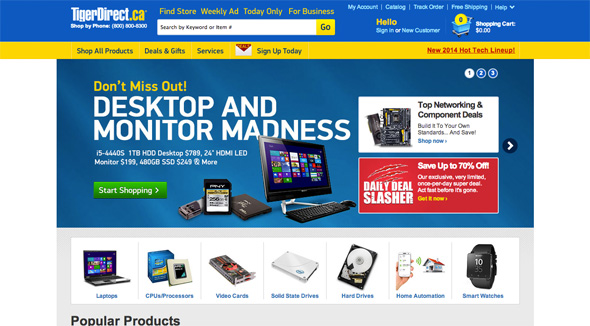 According to NewsBTC, the TigerDirect Canada site might soon be welcoming bitcoin. The online retailer is taking bitcoin further than anyone could have imagined by spreading its acceptance of the digital currency.

Ever since TigerDirect began welcoming online bitcoin transactions earlier this year, the company’s Canadian branch has been left out. The plan was originally intended for US customers, but has since bloomed to where TigerDirect feels bitcoin is making headway.

Though the retailer has not officially admitted to the news, or given any information of when the plan will follow through, the website hinted:

“Bitcoin is not yet supported in Tigerdirect.ca – but stay tuned!”

TigerDirect began welcoming bitcoin payments in January 2014. Since then, the company has made over $1 million in bitcoin sales, while obtaining a new eager-to-spend customer base.

If TigerDirect does follow through with the rumor, it may very well see another $1 million in revenue. In just 3 months after initially accepting bitcoin, the retailer surpassed its own sales expectations. Now that it knows bitcoin has a heavy following, TigerDirect would be making the right move.

Other retailers have also fallen in love with bitcoin. Overstock.com began accepting bitcoin payments before TigerDirect did, and almost six months ahead of its own schedule. Overstock impressed critics over its quick transition and successes with virtual money. Many more online shops followed in suite, hoping for similar outcomes.

Overstock was the first online retailer to make history, by being the first to surpass the $1 million mark in bitcoin sales.

The Florida-based retailer specializes in the sale of electronics. TigerDirect is a Fortune 100 company with annual revenues of over $2 billion, and employs more than 3,000 people. Payment processor BitPay handles TigerDirect’s exchanges and transactions.

It is possible that Canadian customers can once again help to ignite the bitcoin flame for TigerDirect. The proposed venture will add to the strength bitcoin possesses in the financial world.