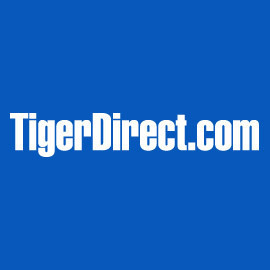 TigerDirect.com is a Florida- based major retailer who specializes in the sale of electronics. Now it’s their turn to announce that they will accept bitcoin payments.

The website offers a guide on the uses of bitcoin and tells users that they can “Start Mining with AMD”. Bitpay will process all of the site’s bitcoin transactions. Bitcoins will only be allowed for use online and not in stores.

Tiger Direct rose from its start as a software retailer in 1989, swallowing up Circuit City and CompUSA. Systemax Inc., parent company to TigerDirect, is a Fortune 100 company with annual revenues of over $2 billion and employs more than 3,000 people. TigerDirect’s Director of Corporate Marketing, Steven Leeds said:

“TigerDirect has always been on the forefront of alternative online payment methods and delivering the most convenient ways for our customers to shop. With individuals building their own high-powered PCs with parts offered on our site to mine bitcoins, it’s a logical fit.”

Another retailer similar to TigerDirect, Newegg.com, has people speculating that they too will jump aboard the bitcoin flagship. Newegg has been teasing the bitcoin community for several months now on whether or not they would be accepting the digital currency. With TigerDirect’s announcement, we may hear Newegg’s decision soon.

Overstock.com began accepting bitcoin earlier this month, almost six months ahead of schedule. Overstock  impressed critics over its quick transition to use virtual money, as those who thought the Overstock CEO was mostly talk were proven wrong.

Online electronics sales within the US are reported to be worth $43.8 billion a year. With TigerDirect’s official decision to utilize virtual currency, there will be more pressure on Newegg to make a move.

After Overstock began the adoptive bitcoin trend, more retailers noticed how bitcoin could be used by businesses rather than just an investment. Overstock’s gamble on bitcoin seems to have been beneficial to all those who were still unsure or second guessing it. Overstock specializes in household goods.

Back in November 2013, Shopify presented that bitcoins could be used to pay for their service, by helping customers build their own online stores.

Two of the biggest major online retailers, eBay and Amazon have yet to join the bitcoin parade.The benefit of using bitcoin over other payment methods is that retailers get to make more money. This is because fewer dollars are going to credit card companies and payment processors such as Paypal. In addition, transactions through bitcoin allow for direct purchases from the seller to the buyer, with no middleman fees.