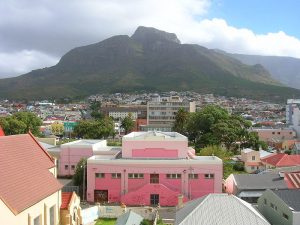 The southern part of Woodstock, Cape Town, South Africa, seen from the northern end, with Devil’s Peak in the background. The pink building in the foreground is the town hall. Sun Exchange is located on the 5th floor of the Woodstock Exchange on Albert Road, Woodstock.

The first marketplace of its kind, Sun Exchange utilizes blockchain technology to enable individuals to own solar cells in solar projects that are typically located in emerging markets that are solar-rich but power-poor. This makes owning solar panel accessible to retail as well as institutional investors the world over while provides businesses and communities in emerging markets access to fully-funded solar power plants to cut down on running costs and push sustainable growth.

The exchange has been leading in the African energy market since 2014. It has spread out the world over with a United States headquarters in California and a regional operating office in Dubai.

Sun Exchange utilizes its blockchain-based platform to democratize the green economy by offering retail customers globally the opportunity to lease solar cells bought on their platform to medium to large solar installations in emerging markets. Solar panels are sold by the single solar cell, bringing down the cost of solar plant ownership to below $10.

Sun Exchange CEO Abraham Cambridge, who is also a serial solar energy entrepreneur, stated in the press release we received, “Solar power is the most promising technology to achieve a zero-carbon future. It’s the fastest growing source of energy, but billions of people don’t own their own roof or have the capital to get it. By breaking down solar panel ownership to a single cell we reduce the cost of going solar by two orders of magnitude and we’re utilizing empty roof space in some of the sunniest cities on the planet, such as Dubai and Johannesburg. To super-charge the process we’ve combined our solar leases with another breakthrough technology – blockchain, namely Bitcoin. Putting the two together empowers anyone to go solar and be part of the global solar energy transformation with just a few taps on a screen.”

David Orban, founder and managing partner of Network Society Ventures and member of the board of directors of Sun Exchange, added, “At the intersection of the exponentially growing technologies of solar photovoltaics, crowdfunding and blockchain, Sun Exchange is uniquely positioned to become a leading force in the profound transformation that we will witness as we build a global 21st century civilization.”

Leveraging blockchain technology and bitcoin, Sun Exchange boosts transparency and cuts the costs of the cross-border transactions, both problems that prevent the majority of commercial solar projects from accessing conventional financing options. The exchange presents a simple and accessible prospect for anyone to join the solar economy by unlocking the potential for the construction of environmentally sound and socially responsible projects that would otherwise not launch.