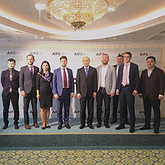 Next generation investment company EXANTE has signed a memorandum of cooperation with Astana International Financial Center (AIFC), an agency of the government of Kazakhstan headed by the ex-head of the Central Bank of Kazakhstan, to launch the Stasis platform that will serve as the foundation for a new fiat-secured cryptocurrency, according to an EXANTE-AIFC joint press release CoinReport received.

The digital currency based on Stasis will be fully backed by not only fiat money, but also several financial instruments, e.g., national treasury bonds of the leading global economies, current account balances of the partnering banks, their deposits, etc. The exchange rate of the new currency will vacillate near the price of the net assets 1k1.

Using EXANTE’s knowledge and experience in blockchain projects, the parties also agreed to collaborate in developing the AIFC -act on the regulation of the crypto assets market and support the growth of the AIFC’s financial technology ecosystem.

AIFC Governor Kairat Kelimbetov said in the release we received, “Blockchain and cryptocurrencies are entering the mainstream of today’s economic reality. Astana’s leading financial regulators have already commenced their work and are laying the foundation for Kazakhstan’s fitech-ecosystem. We believe that the AIFC can become an international hub for blockchain operations and the development of the digital assets market is our key priority in the near future.”

The technology is currently being tested in a closed mode. Upon the launch of Stasis, the new, completely transparent digital currency will be:

While there has been an announcement of a similar currency in Japan recently, that enterprise doesn’t have a transparent money market fund to back it.

The money market fund will allow for the turnover in the system, acquisition of assets, and backing of the currency. The backing transactions will be audited by the government.

The founders believe that Stasis will eliminate all hurdles to the liquidity and accessibility of capital. EXANTE, because of its expertise in Liquid Alternative, has created a connection of trust between the investors and the crypto-world, and now the firm is going to create another one, between a government and the crypto-world. It is expected that the market cap of the new currency will exceed US$2 billion within two years.

Stasis co-founder and CEO Gregory Klumov stated in a press release, “Blockchain technology has several indisputable advantages: transparency, immutability, relatively fast transactions, and reduced cost. These factors are more than enough for a bullish tendency to come. The Global Money Supply (M2) figure is growing at 6% per year and stands at about $50 trillion currently (ex China). Digital assets market will double every two years till at least 2021. We are working on a backbone of the blockchain world, that will close the gap between emerging decentralized finance and the people.”

The Kazakhstani government is currently working on the rules and regulations for digital assets. It plans to soon open a crypto valley in the country and has already organized a workgroup to launch the project.

EXANTE co-founder Anatoly Knyazev noted, “The development of such system will bridge the gap between the traditional asset market and the crypto-world. We see keen interest from the market players, and we already have applications from other government-related financial institutions. The expected market cap of this asset is between 2 and 3 billion in Euro-equivalent.”