Senator Rand Paul has a Positive Outlook on Bitcoin 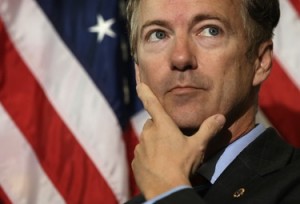 Though Ron Paul is a bitcoin supporter, he feels that the currency is not perfect. In his eyes, bitcoin does not have the true characteristics of money, but he knows there’s always room for improvement. Similar to Paul, his son Rand feels the same way.

In an interview with Fortune, the Kentucky senator stated that he’d change some things about the digital currency. Rand Paul explained:

“…if I were setting it up, I’d make it exchangeable for stock. And then it’d have real value. And I’d have it pegged, and I’d have a basket of 10 big retailers. Because I read [Marc] Andreessen’s article a couple months ago. What fascinated me about it was those 2 to 3% margins. If you multiply that out for all of Wal-Mart (WMT) and they don’t have to use Visa anymore, I’m guessing the people who have to be worried here are Visa (V) and Mastercard (MA). I think it would work, but I think, because I’m sort of a believer in currency having value, if you’re going to create a currency, have it backed up.”

Paul not only has big ideas for bitcoin, but was actually thinking of implementing them in his own campaign at one point. That was until the vibe surrounding bitcoin turned negative.

Paul attended the 2014 Lincoln Labs Conference, where he gave his two cents on the NSA’s spying tactics. As the event continued, co-founder of a fraud monitoring service called BlockScore, asked Paul what his views on bitcoin were.

According to those in attendance, Paul was very enthusiastic about bitcoin. Paul is conservative, but welcomes all beneficial advancements in technology.

He feels that campaigns can be furthered with the uses of such technology. But what holds politicians back from utilizing things like bitcoin in his mind, is their lack of experience with it. With Senator Paul’s outlook on bitcoin’s potential use for the republican party, he feels that bitcoin’s offerings are limitless.

His philosophy over bitcoin is one that looks forward, and doesn’t try to keep things the same.

Recently, Rand’s father, Ron, who is a former presidential candidate and congressman, indicated bitcoin should remain tax free, as it is not recognized as a ‘real’ currency by the IRS.