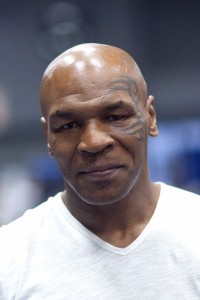 According to an investigation by SiliconANGLE, retired professional boxer Mike Tyson may have been duped into endorsing a Bitcoin ATM network.

Slated to launch in August, the Mike Tyson Bitcoin ATM brands itself as a fast method to convert cash into Bitcoin – within 20 seconds, faster than Tyson’s quickest knockout in a professional match, which clocked in at 30 seconds.

Confirmation of Tyson’s involvement in the initiative came from his Twitter account, where Tyson claimed the Bitcoin ATM service would “change the way we get change.”

According to SiliconANGLE, very little is known about the enterprise other than what the news agency reported, and a number of Bitcoin forums are full of speculation on the legitimacy of the business.

SiliconANGLE said the biggest lead came from the registration of the miketysonbitcoin.com domain name, registered to a Peter Klamka. A search found that Klamka is the CEO of Bitcoin Brands., Inc., which offers a site called Bitcoin for Miles (where airline frequent flyer miles can be bought) and a service called the Bitcoin Vending Network. The latter, according to the news outlet, makes a “mish-mash” of claims, stating it offers ATM services on one hand, then vending machines on the other (the article said it is unclear if these services are meant to be different).

The other service Bitcoin Brands alleges to offer is BitMD, which claims to provide Bitcoin payment service to the medical marijuana industry.

While the company “doesn’t sound too bad in theory, and if it was providing those services it would be,” said SiliconANGLE, adding that it could not find any concrete evidence, aside from the company’s own news releases, that it is.

SiliconANGLE also pointed out that Bitcoin Brands is listed as an OTC (Over-The-Counter) stock, so if the company were providing the services it claims to offer, that would be expected to be reflected in its share price and market cap.

The news outlet said the company’s current share price is $0.0001 per share with a market cap of $6,780. SiliconANGLE then questioned whether a company worth this much had reached a legitimate deal with Mike Tyson to provide these branded Bitcoin ATMs.

“The best guess here is that Mike Tyson has been suckered into a deal by a fast talker who has promised him millions if he gets involved and lends his name to the enterprise, despite the company behind the enterprise having a market cap that is probably about half the value of one bottle of the champagne Tyson prefers to drink,” suggested SiliconANGLE. “The other alternative theory is that Tyson himself has invested money into the service and Klamka is a business partner. But if that’s the case, it throws Tyson’s business judgement into serious doubt as any basic due diligence via a simple Google search would have found that not everything is as it seems when it comes to Bitcoin Brands and its alleged provision of various services.”

Following up on SiliconANGLE’s investigation, CoinDesk reached Klamka for comment, and he refuted the suggestion of a scam. The ATMs are real, he said, adding that Tyson has an “even split” of equity because of the way the license is structured. Meanwhile, Bitcoin Brands – which Klamka stated is not affiliated with his partnership with Tyson – currently operates two ATMs, one in Montreal and the other in New York.

“Nothing happened yet other than we announced the product,” said Klamka to CoinDesk. “We’re not trying to raise any money, he’s telling them ‘I have an ATM coming’ in the same way he says ‘I have t-shirts coming,’ except nobody asks all these questions about the t-shirt maker.”