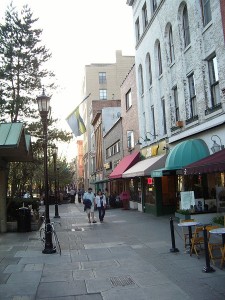 View of the east end of the Ithaca Commons from the corner of East State and North Aurora Streets.At 7.15

Ithacash – a company that aims to allow residents in Ithaca, New York to buy and sell with a new alternative currency called “Ithaca Dollars” – reached a key milestone earlier this month when founder and CEO Scott Morris used the company’s “TXT2Pay” system for the first time, reported the Ithaca Voice.

Morris told the Ithaca Voice the Center Cafe is the first local business to accept “TXT2PAY” payments, and he expects dozens of other merchants to be ready to accept Ithaca Dollars shortly.

“We’re on the verge of launching in earnest,” said Morris, “where anyone can create an account, have Ithaca Dollars on their phones, and pay one another with text messages.”

According to Morris, more than 100 businesses and non-profits signed a letter of commitment stating they would be willing to offer products for Ithaca Dollars.

He told the Ithaca Voice that Ithaca Hours – another alternative currency for the city – was a key inspiration for Ithacash, but his company aims to do something new and is focused on simplicity and ease of use. Morris added that Ithaca Hours will be exchanged for Ithaca Dollars for those who retained the currency.

On the Ithacash website, the alternative means of payments is described as a “transition currency” with features and practices based on several systems used worldwide.

“Transition currencies operate on a regional level and focus on supporting small and mid-sized businesses, local entrepreneurship, fostering a greater sense of community identity, and on positively influencing the community when it comes to making decisions impacting the environment” says the website. “The term ‘transition’ is borrowed from the Transition Movement, and the currencies many Transition Towns have used in support of their focus on generating local resilience and shifting our environmental values and behavior.”

According to the website, Ithaca Dollars will be connected to the USD on a 1 to 1 basis. Individuals can buy them at a variable discount, or earn them through special bonuses, by collecting bounties, by applying for grant funding to support a particular cause, or by helping someone with something they need.

Local businesses that are willing to accept Ithaca Dollars will be included in a directory, on a map, and through other promotional vehicles the system will develop to promote the businesses involved and the deals they offer people using Ithacash. While there is no obligation to accept Ithaca Dollars, as they are not legal currency, but the website describes them s “local” tender, which is “good for many things, all on a volunteer basis.” Ithaca Dollars are still subject to sales and other taxes, and can be considered regular cash when reporting these duties to the authorities.

Gary Ferguson, executive director of the Downtown Ithaca Alliance, praised Ithacash and told the Ithaca Voice that he was looking forward to seeing Ithaca Dollars being used in the city core.

“I’m optimistic about their role in the community,” said Ferguson. “It’s been nice to see them grow and get to the point where they can launch.”