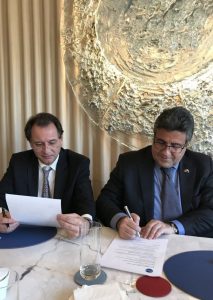 South Korea-headquartered Mile Unity Foundation, a public benefit organization aimed at educating the global community about the new technologies and tools for the worldwide economy, announced in a press release it sent to CoinReport the signing of an agreement with Brazilian Chamber of Commerce and Industry to collaborate in the field of distributed ledger technology (DLT)/blockchain technology in international trade.

According to the news release, before the agreement signing, the present situation in international circulation of digital currencies and the risks that existing financial system is confronted with were analyzed at a meeting, where members of Sociedade Metropolitana, Brazilian-Russian Chamber of Commerce and Industry and BRICS Alliance were also present.

Brazilian-Russian Chamber of Commerce and Industry president Gilberto F. Ramos commented on the occasion, “Despite the distracting efforts of bank lobbyists, during current period of political changes, we are observing significant increase of the interest in decentralization. There is a number of governmental authorities which are already discussing blockchain technologies. It means that it can become one of the main factors for the economy growth in the nearest future.”

The Brazilian-Russian Chamber of Commerce and Industry unites Russian and Brazilian firms with the aim to create business dialogue between two countries.

As well as educating people about new financial technologies, Mile Unity Foundation helps them apply the technologies in real economy. The organization’s main objective is to establish an embassy in most active countries, with the embassy being a boiling point of the blockchain community in those countries.